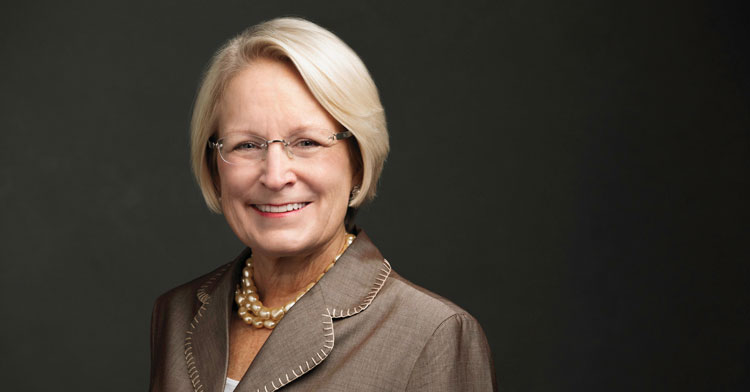 Judy Perry Martinez became president of the ABA at the close of the annual meeting in San Francisco after 35 years of service with the association.

Martinez, who is of counsel with Simon, Peragine, Smith & Redfearn in New Orleans, has held several leadership roles with the ABA. She served as chair of the Commission on the Future of Legal Services and as special adviser to the Center for Innovation. She was chair of the Standing Committee on the Federal Judiciary and a member of both the House of Delegates and Board of Governors.

Martinez spoke with the ABA Journal in August about her experiences with the association and goals for her year as president.

So it’s been just over a week since you were sworn in as the ABA’s new president. What has it been like so far?

So far it’s been a solid launch. Getting the team together and working in the same direction is really what the planning year was about. We’re off to a good start.

You mentioned your husband Rene during your speech to the House of Delegates at the annual meeting. What do he and your family think of you being president?

I have four children between the ages of 24 and 30. They have been tremendously supportive throughout their lives of my work in the ABA and in the local and state bar. And in fact, they used to come to many, many meetings when they were small. I have told the story before about my youngest son cleaning out his room before he went off to college six years ago, and opening up the desk drawer with him and finding a whole pile of ABA Annual Meeting badges that he had saved. And when I asked why, he said because they were important, and they were important memories.

The ABA has always been a part of what we do, and as a consequence, they have really grown to appreciate the work of the ABA. They will see articles and hear about things and wonder what the ABA is saying or doing on the topic. As a consequence, it makes it even more meaningful for me.

What was most memorable from your year as president-elect?

The way that Bob and I started off our respective years. Bob Carlson as president, and I as president-elect, going down to the border, spending a week doing pro bono asylum work and visiting the relief centers and the respite centers. Also observing in federal court and in immigrant court, and actually going into the detention centers to meet with detainees. That really set the stage for understanding even more deeply what we need to do in terms of the immigration challenges that are facing our country right now. Making sure that due process is guaranteed for all involved in those proceedings, as well as understanding the great need for pro bono assistance not only at the border in South Texas but all over the country.

And you are planning to go down to the border again with Trish Refo?

Yes, Trish Refo, the president-elect, and I will be going down to the border this coming week. We will be spending a week down there doing the same type of work, going into observe legal information seminars, going into the detention centers to work with detainees on an individual basis as well as observing proceedings, and going again to the relief and respite centers that are available in the community.

The communities down there do so much to support the individuals coming into our country. It is quite remarkable. From community groups to just people who are in residence there and citizens to churches and others, really I think the country owes them a good deal of thank yous for all they have done, even many years before this more immediate surge of immigrants coming into our country. They have been down there doing that work, simply because they wanted to, for many, many decades.

Why did you decide you wanted to be president of the association?

I had served in quite a few different capacities over the years. With each opportunity of service, I gained a greater understanding of the American Bar Association, what I perceived its members want as well as what I know that the public needs from us both as an association and as a profession. As I deepened my understanding of the association and its work, I decided I wanted to step up in service. The way I thought I could best contribute was, in fact, to lead.

What are some of the goals you have set for your term, and how do you plan to accomplish them?

My goals for my term are the association’s four goals. They are very succinctly stated: to serve our members, improve our profession, enhance diversity and eliminate bias and advance the rule of law. And if we can make progress—and I mean I aim to make significant progress on each of those goals— then I will know that I have had a year that made, along with everyone else who contributes, a difference for the association, the profession and the public.

You have also been a proponent of innovation in the legal profession. Do you think you will get any pushback, and in what ways?

In 2014, William Hubbard, who was then president, established the ABA Commission on the Future of Legal Services, which I had the privilege of chairing. Out of that commission’s several years of hard work came a final report in August 2016, which laid forth findings as well as recommendations. While that report is not policy of the ABA House of Delegates, it has really been a blueprint for many who are looking at these issues that are critical to the future of our profession.

As a consequence of that report, the Center for Innovation was established at the ABA, and there are many conversations going on across the states at the prompting of the state supreme courts, which are the regulators in our country, as well as state bar associations. We are doing important active listening to those conversations, because we know from our experience on the Commission on the Future of Legal Services that many times it is the idea of one individual, an attorney or a design thinker working with an attorney, who can make a difference in how we serve the public.

Change is hard. Helping people understand why change may be in the interest of those they serve is sometimes a challenge, but what I know is that when lawyers get together, one of their greatest skills is to sit and discuss thoughtfully what the problems are and the solutions that may be at hand or within our reach. I also know that lawyers are terrific at coming up with solutions, and as a consequence, there is a realization that the solutions will drive more access to justice.

There have also been a lot of conversations about how to increase membership and revenue. How do you and the leaders who follow you plan to address those issues?

What we’re doing at the ABA with regard to setting a new value for membership is quite exciting. I have been with the ABA for many years, and I think it’s at this moment that even I see a realization of the value of membership more than I have ever seen before. I was at the Antitrust Law Section meeting immediately following the ABA Annual Meeting, and seeing the number of resources that they lay out for their members, the books and other publications, new podcasts that are coming out as well the opportunity to come to these conferences to network and to be with and hear from major leaders in their area of law. That is true value for members.

Also, what we have to come to embrace in a way that we have not certainly embraced before is the value that the American Bar Association brings as the only and unique body that speaks out with authority and with knowledge on areas of law that we know are important to our country and the world. What we do is something different than what state and local and some specialty bars do when we speak out about the independence of the judiciary, we speak out about the rule of law, we speak out about due process and separation of powers and other issues that are at the core of what we do. When one lawyer speaks out, it can be powerful. When the ABA speaks out about these issues, I believe it is impactful.

Thinking about the profession in general, how has it changed since you were in law school, and where do you think it needs to adapt?

I entered law school in 1979. I was fortunate to be at a school that had a significant number of women in my class. Certainly not enough. And what I have seen over the years is not only a change in the profession with regard to a greater presence of women and persons of color, but I have also seen over those years a growing awareness of why we will never be at our best until anyone who wants to come into this profession with hard work and competency and skills and ethics knows that they should be in our profession.

All of the work we do with regard to enhancing diversity, eliminating bias, increasing inclusion is so important each and every day not only at the association level but at the individual attorney level. We never know when we can make a difference in what we say or what we do or even how we welcome someone, or in making sure that this person knows that if they want to be an attorney, they should be attorney.

We have a lot more work to do. We have an imperative to address issues of gender parity as well as the critical issues of what we are not doing, what we should be doing to make sure that we have a greater presence of persons of color within our partnership ranks within law firms as well as within corporate law departments and elsewhere. We also know we need to have a critical mass of individuals on management committees at law firms, both women and persons of color, in order to see a real material difference in how those firms operate. We have to lean on our champions, specifically white males, to stand with us as allies in what we want to accomplish in terms of progress toward greater diversity and inclusion.

I think also, importantly, we have to take a “no-ladders up approach,” meaning that we have to make sure that even when we have achieved the numbers that women and persons of color believe have a real leadership presence within our profession, we have to make sure we are not leaving behind any colleagues, those with disabilities or our LGBTQ+ colleagues. Because if they are left behind, our profession is not at its best for the people we serve.

And one last question, what are you most excited about?

I think I’m most excited with regard to the various issues we have talked about, knowing that the ABA not only talks and speaks to these issues but has specific programming, policies, toolkits, projects, networking opportunities and more in terms of resources to make sure that our talking to an issue becomes action on an issue. That is something that I think we will be spending a lot of time on on the road, making sure that the resources that we have within our tent—and it’s a very big tent—are known to individuals, are utilized by law firms, are made readily available to law schools and really make a difference.

This article ran in the Winter 2019-2020 issue of the ABA Journal with the headline “Year of Service: A Q&A with ABA President Judy Perry Martinez.”