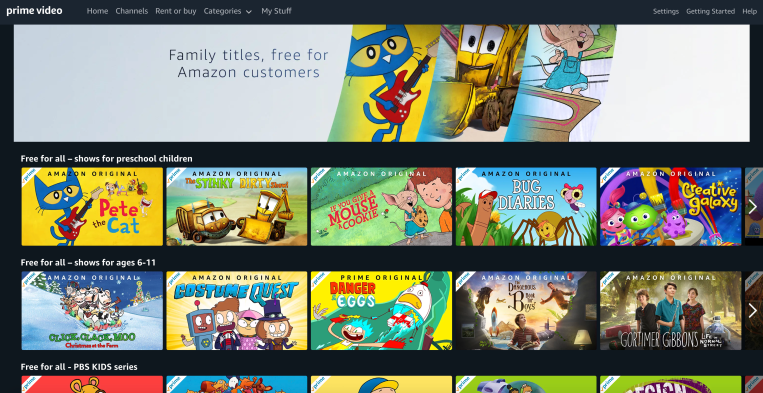 Amazon is making a selection of family-friendly and kids programming available for free streaming on Prime Video, as a result of the COVID-19 health crisis which has people trapped at home. The content is available to all Amazon customers, and includes a mix of Amazon Original kids and family shows as well as select third-party family movies and TV series licensed from studio partners.

Amazon says it’s continuing to work with content partners to widen the selection over time.

At launch, the U.S. version of the free service includes the following Amazon Originals: “Click, Clack, Moo: Christmas at the Farm,” “Big Diaries,” “Costume Quest,” “Creative Galaxy,” “Danger and Eggs,” “Dangerous Book for Boys,” “Gortimer Gibbons Life on Normal Street,” “If you Give a Mouse a Cookie,” “Jessy and Nessy,” “Just Add Magic,” “Just Add Magic: Mystery City,” “Little Big Awesome,” “Lost in Oz,” “Niko and the Sword of Light,” “Pete the Cat,” “Sigmund and the Sea Monster,” “The Snowy Day,” “The Stinky and Dirty Snow,” “The Kicks,” “Tumble Leaf,” and “Wisenpoof.”

Amazon confirmed to TechCrunch that Amazon Original kids and family TV series will be available for free worldwide, but licensed content will vary by country.

The majority of the content, at present, is aimed at the preschool crowd up to younger school-agers. The selection doesn’t include recently released movies or other popular G-rated or PG-rated box office hits that parents will also enjoy. But the offering will help parents who are struggling to work from home and using the TV as a babysitter of sorts to keep little ones occupied.

Typically, Amazon makes free TV and movies available only to Prime subscribers, as one of the many perks of Amazon’s Prime membership program. But in this case, consumers will only need to create a free Amazon.com account, if they don’t already have one, in order to watch the free programs.

Amazon isn’t the first streamer to add free content to help families staying in quarantine and self-isolating during the COVID-19 outbreak.

Last week, Sling TV launched free streaming that included news and entertainment, as well as kids TV. Hulu added free live TV news to its on-demand service on Friday. Elsewhere, studios are breaking the theatrical window to deal with ticket sale losses as theaters close down. NBCU recently said it was bringing “The Hunt,” “The Invisible Man,” and “Emma,” to home viewers.

Disney, meanwhile, is making its own movies available early as well, including through its streaming service, Disney+, where both “Frozen II” and “Onward” are arriving ahead of schedule. (“Frozen II” is live now. “Onward” arrives on April 3).