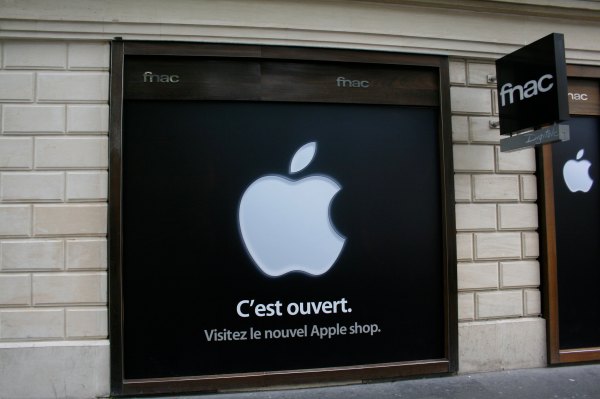 The wheels of the regulatory machine continue to turn, and today Apple, along with two of its wholesale partners, was dealt a major blow in France over antitrust violations, by receiving the biggest-ever fine levelled against a business over anti-competitive practices and “sterilizing the market” for Apple products, specifically as they are sold across a range of Apple Stores, large “big box” retailers and smaller, independent resellers.

Apple, along with its wholesale distribution partners Ingram Micro and Tech Data, have been accused and fined by the French competition authority (Autorité de la Concurrence), over operating a cartel — affecting pricing and who could sell products — for virtually all Apple products including computers and tablets, but not the iPhone (which is often sold via mobile phone distributors and carriers). Apple is being ordered to pay up €1.1 billion ($1.2 billion), while Tech Data was fined €76.1 million and Ingram Micro €62.9 million in the fine.

Together, the three have achieved the dubious distinction of getting the highest-ever fine for anti-competitive sales tactics.

“During this case, the Authority deciphered the very specific practices that had been implemented by Apple for the distribution of its products in France (excluding Iphones), such as the iPad,” said Isabelle de Silva, President of the French Competition Authority, in a statement. “Given the strong impact of these practices on competition in the distribution of Apple products via Apple premium resellers, the Authority imposes the highest penalty ever pronounced in a case (€1.24 billion). It is also the heaviest sanction pronounced against an economic player, in this case Apple (1.1 billion euros), whose extraordinary dimension has been duly taken into account. Finally, the Authority considered that, in the present case, Apple had committed an abuse of economic dependence on its premium retailers, a practice which the Authority considers to be particularly serious.”

Apple said that it plans to appeal the ruling.

“Apple has been operating in France for over 40 years and we are proud of our many contributions to job creation and economic development.  Our investment and innovation supportS over 240,000 jobs across the country. The French Competition Authority’s decision is disheartening,” a spokesperson said. “It relates to practices from over a decade ago and discards thirty years of legal precedent that all companies in France rely on with an order that will cause chaos for companies across all industries. We strongly disagree with them and plan to appeal. We are extremely proud to serve our French customers and believe they should be allowed to choose the product they want, either through Apple Retail or our large network of resellers across the country. We will continue to work hard to deliver the best products and services in the market.”

Apple’s defense will likely highlight that the claim that Apple worked to diminish competition for Apple products between its distributors and resellers hasn’t been proven, and that its collective ambitions are the same: better prices and better service. (Whether that will wash is another question.)

The announcement follows reports last week that the fine was forthcoming, and caps off years of work: investigations into the case started as far back as 2012, in the wake of the collapse of Apple’s biggest seller in France, eBizcuss, in 2011, and a subsequent lawsuit filed by the company accusing Apple of starving it of inventory after its CEO publicly accused the company of unfair price competition. Litigation related to that case ended in 2017.

At issue in the case are the three kinds of resellers that typically distribute Apple-branded technology: large retailers (such as mega-supermarkets and big-box retailers), of which there are about 1,800 in France; smaller resellers that tend to be independent businesses that also provide services alongside sales (these tend not to be the norm in the US but are still common in Europe, albeit less so in countries like the UK); and Apple itself, by way of its Apple Stores online and in shopping areas. Apple issues “authorised” and “premium” badges to its resellers, giving the latter special access to products and services provided they play by more specific rules in how they sell and price items. It’s this latter category that has been at issue in this case. EBizcuss was an example of the latter.

The competition commissioner noted that Apple and its partners violated three specific areas:

— Apple and the two wholesalers agreed not to compete with each other and also to prevent other distributors to compete on price, “thereby sterilizing the wholesale market for Apple products.”

— Secondly, premium distributors were forced to keep prices high to keep them at the same level as those of integrated distributors.

— Third, Apple has “abused the economic dependence” of these premium distributors, by subjecting them to unfair and unfavorable commercial conditions compared to its network of integrated distributors. (These last two points relate specifically to the accusations eBizcuss had lodged against the company.)

The commission notes that Apple’s actions resulted in “supply difficulties, discriminatory treatment, unstable conditions of remuneration for their activity (discounts and in progress),” which in turn had an effect on squeezing their margins.

“The Authority thus noted that, during the launch of new products, the APRs were deprived of stocks so that they could not respond to orders placed with them, while the network of Apple Stores and retailers was regularly supplied. This has resulted in a loss of customers, including regular customers. They have even sometimes been forced, to respond to an order, to source themselves from other distribution channels, for example by ordering themselves directly from an Apple Store as an end customer would have done in order to to supply their customers.”

While Apple may try to appeal the fine, what will be most interesting to see is how and if the actions affect how the company’s products are priced going forward. Apple has long cultivated a premium image with higher prices than many others on comparable consumer electronics.

It has always been essential to the company to have a wide distribution network, that’s clearly had the effect of making it harder for it to control premium pricing, one reason why it has made such a big push to expand its own direct retail operation. The case in France highlights the generational shift that’s been taking place for years, and while it may be a thorn in Apple’s side, I can’t help but wonder if it will simply signal the company moving even more aggressively to continue bringing more of its sales under its own roof.