The argument yesterday in Liu v. Securities and Exchange Commission revealed a surprisingly unified bench, as the bulk of the discussion suggested sympathy for a compromise decision that would accept fully the views of neither side.

The case involves the scope of relief in enforcement actions that the Securities and Exchange Commission brings in federal court (as opposed to its internal administrative proceedings). The specific problem concerns the availability of a general remedy of “disgorgement” of a defendant’s profits from an unlawful scheme, in addition to specific provisions for penalties and injunctive relief. 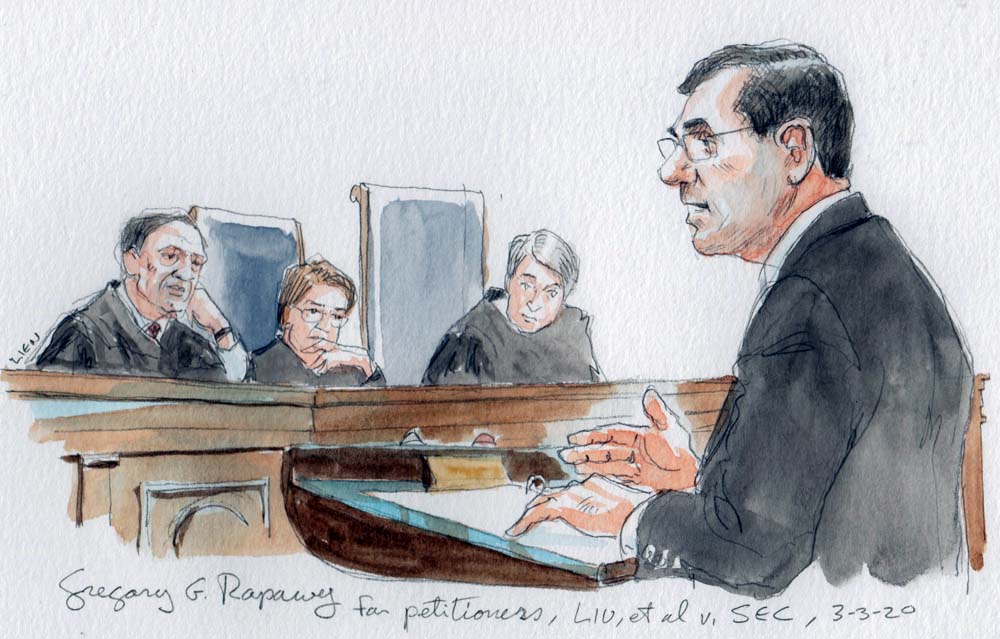 The case arises from an investment fund operated by petitioners Charles Liu and Xin Wang, which solicited investments that were to be used to construct a cancer treatment center in California. The SEC brought suit alleging that Liu and Wang did not spend the funds as promised. Persuaded by the SEC’s allegations, the district court enjoined future activity by the defendants, imposed penalties equal to the “personal gain” that the defendants received from the fund (about $8 million) and also ordered them to “disgorge” the remaining $19 million that they received from investors. The argument yesterday considered the propriety of that last item – the order of disgorgement.

Arguing for Liu and Wang, Gregory Rapawy’s first point relied on a Supreme Court decision three years ago, Kokesh v. SEC, which held that a claim for disgorgement in an SEC enforcement action should have the shorter statute of limitations accorded to “penalties.” Rapawy reasoned that the justices traditionally do not recognize actions for “penalties” under the SEC’s general authority to seek “equitable relief” that justified the agency’s lawsuit. But Justice Ruth Bader Ginsburg cut him off sternly, quoting the quip of a famous academic (Walter Wheeler Cook) that the “tendency to assume that a word appearing in two or more legal contexts [has the same meaning in both] is a notion that has all the tenacity of original sin and must constantly be guarded against.”

Indeed, none of the justices displayed any sympathy for Rapawy’s argument that the explicit availability of disgorgement in the SEC’s administrative proceedings suggests that the courts should not recognize its availability in judicial proceedings under the catch-all provision for “equitable relief.” They did, however, show strong support for the idea (pressed in an amicus brief filed by a group of law professors) that the SEC’s conception of “disgorgement” is broader than might be appropriate.

That point came out early on when Justice Samuel Alito asked Rapawy whether his “argument [is] that disgorgement is never possible or that disgorgement has been interpreted too broadly by the courts? Suppose it were limited to net profits and suppose every effort was made to return the money to the victims of the fraud?” In the same vein, moments later, Justice Sonia Sotomayor challenged Rapawy’s argument that the statute isn’t broad enough to cover disorgement, “assuming, as Justice Alito has stated, that the [remedy] is only for net profits that are given to the actual people injured.” Justices Brett Kavanaugh and Elena Kagan promptly followed up, pressing Rapawy to accept disgorgement with those same two limitations.

When Rapawy suggested that it might be difficult for courts to police efforts to return funds to the wrongdoer, two more justices jumped in to disagree. Chief Justice John Roberts scoffed at the idea that it would be hard to return the money to investors, suggesting that “[p]resumably the investors would want money, and … I would assume that investors should be pretty easy to find if there’s money available.” Similarly, Justice Neil Gorsuch offered a parallel to “our class action practice today, [in which] we do police the efforts of the defendant to find and return money to the investors.” Why, Gorsuch asked, “doesn’t that supply a ready guide and maybe make it impermissible for the government to not make any effort at all … assuming we reject your primary argument?”

Conversely, the court’s questions to Deputy Solicitor General Malcolm Stewart, representing the SEC, focused on why the government so often has kept the receipts from these actions rather than returning them to investors. Both Sotomayor and Gorsuch pressed Stewart early on about why the government should be keeping the funds. As Sotomayor put it, the statute suggests that the “equitable relief” that is “appropriate” is equitable relief “appropriate or necessary for the benefit of investors,” which doesn’t seem to suggest a remedy that provides funds for the federal government in general.

Stewart eventually responded that the SEC would have no problem with a district court’s ordering the government in an appropriate case to return the funds to the investors, but that seemed unacceptable to Kavanaugh, who interrupted to “make sure I’m clear on your answer to Justice Gorsuch and Justice Sotomayor? Because the first time you answered it, you said it would be appropriate for a district court to say that. … Would it be appropriate for this Court to say that’s the rule; namely, that it has to be returned to investors where feasible?”

As Stewart’s argument wound down, Ginsburg turned to the question of net profits, asking Stewart whether he could defend the U.S. Court of Appeals for the 9th Circuit’s conclusion that the government was entitled to disgorgement of every dollar raised by the defendants based on its view that “there were no legitimate expenses to deduct to arrive at net profit.” Stewart attempted to defend the lower court findings as purely factual findings not well suited for review by the Supreme Court, but on rebuttal Rapawy offered a strongly contrary explanation. According to Rapawy, the record also contains an explicit factual finding that the defendants already have returned every dollar that the two of them individually received, which would mean that they already have returned all of their net profits.

It always is hazardous to draw firm conclusions from discussion at oral argument. This case, though, does suggest a bench coalescing around a unanimous (or nearly unanimous) view that disgorgement is appropriate in the abstract, with a remand to the lower court to consider whether the remedy was appropriately tailored in this particular case. If the justices can settle on such an outcome, the case well might be decided quite soon.

Editor’s note: Analysis based on transcript of oral argument.