Editor’s note: On March 16, the Supreme Court postponed oral argument in United States v. Briggs and the other cases scheduled for the March sitting, and “will examine the options for rescheduling those cases in due course.” 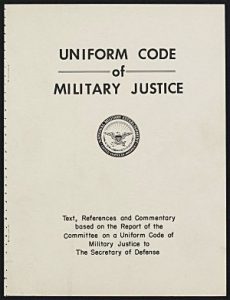 When the Supreme Court entertains argument in United States v. Briggs, which had been scheduled for Monday, March 23, it will be asked to decide whether three men convicted of military rape should not have been prosecuted in the first place because of the statute of limitations. And, should each side’s principal argument fail, the court may be forced to decide a bigger question: whether the Eighth Amendment prohibition against capital punishment for non-homicide rape applies to rape in the military.

This litigation consists of three consolidated cases, which all involve male military personnel convicted of raping female military personnel. Michael Briggs, Richard Collins and Humphrey Daniels claim that the statute of limitations should have barred their prosecutions. The government argues that there is no statute of limitations for military rape because Congress exempted all military crimes punishable by death from limitations. The defendants counter that the cruel and unusual punishments clause of the Eighth Amendment prohibits the death penalty for all rapes not involving fatalities, including military rapes. That, in turn, means there is a statute of limitations for military rape, and it expired before any of the three men were prosecuted. The U.S. Court of Appeals for the Armed Forces agreed with the defendants.

In May 2005, “following an evening of heavy drinking,” Air Force Captain and F-16 instructor Michael Briggs went to the room of DK, a junior member of his squadron. He “forced her to have sex with him even though she said ‘no’ and ‘stop’ and tried to roll away.” Eight years later, DK obtained evidence sufficient to prove the rape, and Briggs was convicted by a court-martial. He did not raise a statute-of-limitations objection, presumably because it was well established that there was no statute of limitations for military rape, which was a capital offense.

Subsequently, in a reversal of its previous position, the CAAF decided that the combination of the Supreme Court’s 1977 decision in Coker v. Georgia and its 2008 decision in Kennedy v. Louisiana prohibits capital punishment for military rape, and therefore that rape is no longer “punishable” by the death penalty. Instead, the CAAF held, the Uniform Code of Military Justice’s default five-year statute of limitations applied to military rape. Briggs should be able to object that his prosecution was time-barred, the CAAF found.

In August 2000, Richard Collins was an instructor at Sheppard Air Force Base in Texas. HA, a fellow Air Force service member, was enrolled in his course. One evening while HA was eating alone on the base, she encountered an apparently intoxicated Collins. She suggested that he take a cab home. He insisted that she drive him home and help him to the door. Once inside, he “suddenly pushed HA against the wall and then threw her onto the floor. HA initially resisted, but Collins struck her in the face,” then raped her.

Fearing reprisal, HA refused to report Collins. She admitted to a female instructor that she had been raped but refused to identify the assailant. Finally, in March of 2014, HA made an unrestricted report identifying Collins. She told investigators that, during the assault, she had “fixated” on a family portrait hanging on the wall above the couch in the front room of Collins’ home. She described the portrait in detail. An investigation turned up a photograph of the front-room wall circa 2000, with a family portrait matching HA’s description hanging above the couch. The portrait itself was discovered in a storage closet.

Collins was tried by court-martial in 2016. He did not raise the statute of limitations. As with Briggs, however, Collins’ resulting conviction was overturned by the CAAF when it decided that military rape was no longer punishable by death.

In July 1998, Humphrey Daniels was stationed at Minot Air Force Base in North Dakota. He met TS, a civilian, at the gym, where they exchanged phone numbers. After TS “reluctantly agreed” to allow Daniels to visit her home, he repeatedly asked to stay the night. She refused because her son slept in her bed, and she had nowhere else for Daniels to sleep. Eventually, she let him sleep in the bed, where her son was also sleeping. He “kept trying to touch” her and she “kept pushing him off.” Eventually, however, he “pushed her shorts to the side” and “entered [her] with his penis without consent.”

After police told TS that it would be very hard for her to prove rape, she declined to participate in the investigation. Much later, in 2015, a detective in Fairfax County, Virginia, contacted TS while investigating a complaint that Daniels had been stalking an old girlfriend. The detective had learned that Daniels had been investigated for allegedly raping TS back in 1998. The detective persuaded TS to proceed with the rape allegation, which culminated in Daniels’ conviction by court-martial. As with the other two men, Daniels’ conviction was overturned by the CAAF because of the statute of limitations.

A key issue in this litigation is which subsection of the UCMJ, 10 U.S.C. Section 843, applies: subsection (a), which states that “any [military] offense punishable by death may be tried and punished at any time without limitation,” or subsection (b), which creates a five-year statute of limitations for other military offenses. The government argues that Section 843(a) applies because military rape is made “punishable by death” by 10 U.S.C. Section 920(a), which states, “Any person subject to this chapter who commits an act of sexual intercourse, by force and without consent, is guilty of rape and shall be punished by death or such other punishment as a court-martial may direct.” The three defendants argue that military rape is not “punishable by death” because the Supreme Court’s Eighth Amendment precedents prohibit capital punishment for non-fatality rapes. And if military rape is not punishable by death, then the applicable limitations period is the default provision of Section 843(b).

The government makes multiple arguments that military rape is “punishable by death.” First, it makes a statutory interpretation argument — that Congress did not intend the military rape limitations period to be subject to the vicissitudes of Eighth Amendment jurisprudence. It intended military rape to have no statute of limitations, irrespective of what punishment is ultimately available. Because the statute authorizes capital punishment for rape, rape is “punishable by death,” whether or not that punishment may actually be carried out.

Second, the government makes a policy argument: Coker and Kennedy do not apply in the military context because “[s]exual assault in the military is … devastating to the morale, discipline, and effectiveness of our armed forces.” The Supreme Court has never decided whether the Eighth Amendment applies to courts-martial, and the government argues it should not apply, because of the deference that the courts owe to Congress in determining the “regulations, procedures, and remedies related to military discipline.” “The judgment that military rape should be a capital offense reflects the distinctive harms to military discipline, recruitment, morale, combat readiness, and coalition-building that are caused by rape in the military ranks,” the government argues.

The defendants support the CAAF’s most recent conclusion that Coker and Kennedy prohibit capital punishment for military rape. But they have their own argument for why the court need not reach the constitutional question in their cases. In 10 U.S.C. Section 855, Congress enacted its own statutory prohibition against cruel and unusual punishment, which the defendants claim prohibits capital punishment for military rape without reference to the Eighth Amendment. Section 855 states in part, “Punishment by flogging, or by branding, marking or tattooing on the body, or any other cruel or unusual punishment, may not be adjudged by any court-martial or inflicted upon any person subject to this chapter.”

The government has yet another alternative argument — that Briggs is subject to prosecution even if Collins and Daniels are not. In 2006, Congress amended Section 843(a) to explicitly include rape among the military crimes for which there is no statute of limitations, irrespective of whether it is punishable by death. The events underlying Briggs’ conviction occurred in 2005. The government argues that Congress intended its 2006 amendment to cover all military rape cases back to 2001, because the default five-year limitation period in Section 843(b) would not yet have passed for such cases when Section 843(a) was amended in 2006. (Collins’ case stemmed from events that happened in 2000, Daniels’ in 1998.)

At oral argument, it will be interesting to see whether any of the justices demonstrate an appetite for the constitutional issue, or whether they think the statutory interpretation questions are dispositive.