To borrow an analogy from Chief Justice John G. Roberts Jr., if lawyers are baseball players and judges are umpires, then Greg Smith not only calls balls and strikes, he also throws them and tries to hit them.

Smith is a family lawyer in Tennessee. When he’s not practicing law, he’s interpreting it—serving as a judge at three different levels of government. He serves as a municipal court judge in Pleasant View, Tennessee, which is about 25 miles northwest of Nashville. 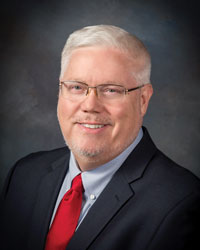 He is also active in Native American justice, serving as a judge on multiple tribal courts, and he’s been chief judge of the U.S. Department of the Interior’s Court of Indian Appeals since 2018.

In fact, he was a judge before he was even a lawyer. “During law school, I was a magistrate in Birmingham, Alabama,” Smith recalls. “I did a night court just like Harry Anderson [on the NBC show Night Court]. I was able to be appointed a municipal magistrate before I got my degree” from Samford University’s Cumberland School of Law in 1988.

“The midnight magistrate job primarily did initial appearances and signed warrants,” he recalls. “It would be similar to a justice of the peace position like Nevada still has.

“The position was appointed by the chief judge of the Birmingham city court on the recommendation of a dean from my law school. There were several students who held this job while I was in school.”

He opened up his solo practice in Clarksville in 1993. Four years later, he was appointed a municipal court judge in Pleasant View.

“I got one of the best pieces of judging advice from former Judge John Godbold of the U.S. Court of Appeals for the 11th Circuit:

“ ‘Hardly anyone knows who you are, but they’ll decide from what they see of you as a judge because everyone in a small town will know the local traffic judge.’ ”

Asked about ethical issues that might arise in working as a lawyer and a judge, Smith says, “It’s not all that hard. Pleasant View is a traffic court primarily and [is located in] the next county over. You just recuse yourself if a potential conflict comes up.”

As a lawyer, Smith is a knowledgeable advocate for his clients, according to Ray Runyon, partner at Runyon & Runyon in Clarksville.

As a judge, he finds Smith “respectful to both the bench and opposing counsel.”

“He is a throwback to a different era inasmuch as he moves at a slower, more considered pace,” Runyon says. “I think that this allows him to think effectively on behalf of his clients.”

According to Smith, his interest in Indian law came from being appointed guardian ad litem for a newborn Native American infant at Fort Campbell, which straddles Tennessee and Kentucky.

The infant was removed from the parental home because the parents repeatedly dunked a different child left in their care in the bathtub as a form of discipline.

“This case piqued my interest because I had to house this baby until the [Sioux] tribe could come get her,” says Smith, recalling how the differing circumstances of each baby—his child would have a fairly pampered life while the other baby would probably never meet her parents—broke his heart.

Ultimately, when it comes to juggling his myriad responsibilities, Smith harks back to a piece of advice he remembers from another judge.

“Judge Arthur Haynes Jr. [of the Jefferson County, Alabama, circuit court] had a little sign on his bench that said: ‘The job doesn’t pay enough to be a jerk.’ “So I say take a recess when you’re losing your objectivity,” he says.

This article ran in the Winter 2019-2020 issue of the ABA Journal with the headline “Juggling Act: Tennessee attorney Greg Smith balances his law firm’s demands with duties as a judge in local, federal and Native American courts.”