Former Vice President Joe Biden notched important wins early in the evening, taking Virginia and North Carolina, the third most delegate-rich state in Tuesday’s contest. Vermont Senator Bernie Sanders won his home state early in the night, but failed to carve out a foothold in the East Coast and Midwest.

“Just a few days ago the press and the pundits had declared this campaign dead,” Biden announced in a triumphant speech mid-way through the evening. “I am here to report, we are very much alive.”

As of 8:45 p.m. Pacific Time, Biden had collected Alabama, Arkansas, Minnesota, North Carolina, Oklahoma, Tennessee, Massachusetts and Virginia with Sanders taking Colorado, Utah and Vermont. At the time of writing, a winner has yet to be declared in Maine, Texas and California, with the latter state leaning toward Sanders. 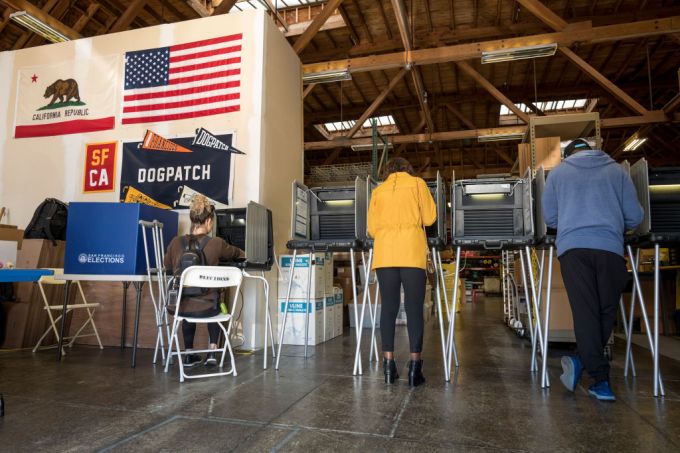 Biden stormed into Super Tuesday with new momentum, fresh off a vital win in South Carolina over the weekend and some swiftly collected endorsements friom his former rivals, including Amy Klobuchar, Pete Buttigieg and Beto O’Rourke. That momentum created a spate of decisive victories for Biden, as the moderate vote appeared to flow easily to him, overwhelming Sanders in some states the Vermont senator was favored in, including Oklahoma, Minnesota and his neighboring state of Massachusetts.

Lacking endorsements from former candidates but not momentum, Bernie Sanders entered Super Tuesday with 60 delegates to Biden’s 54 and Elizabeth Warren’s eight. His results in early voting states, consistent debate performances and grassroots support marked Sanders as the candidate to beat, but those strengths failed to translate into boosted turnout for Sanders in some key states.

In spite of early narratives, delegate totals before Super Tuesday represented just a sliver of the 1,991 delegates necessary to secure the nomination at the Democratic National Convention this July. A total of 1357 delegates are up for grabs on Super Tuesday.

Super Tuesday marked the first time Bloomberg appeared on a ballot, but his massive cash spend still resulted in an underwhelming night, with the former mayor only picking up a small handful of delegates in American Samoa. Former New York Mayor Mike Bloomberg entered the formal race with more than $400 million spent on ads but zero delegates. Warren also underperformed Tuesday, with a more competitive race than anticipated even in her home state of Massachusetts, which ultimately went to Biden. Oklahoma also showed no loyalty for Warren, who was born in the state—after choosing Sanders in 2016, Oklahoma opted for Biden in Tuesday’s contest.

Tuesday’s results will reshape the race for the Democratic nomination, much as Biden’s long-promised win in South Carolina breathed new life into a flagging campaign. Beyond likely narrowing into a two-person race, the new dynamics emerging out of Tuesday will shift the framing of the contest as a whole. That change is likely to pit political Biden’s promise of incremental political change more directly against Sanders and democratic socialism.

The 2020 race has challenged the tech industry in more ways than one. With both Trump and Bloomberg stress-testing social platforms with a deluge of ads, tech companies are still trying to figure out where to draw their respective lines on political advertising. Those efforts are on top of the imperative for major platforms to avoid a repeat of 2016 by fending off coordinated disinformation campaigns seeking to roil Americans politics.

Beyond platform manipulation concerns, candidates like Warren and Sanders successfully tapped into mainstream backlash against big tech over the course of their campaigns, cultivating even more criticism for companies already under scrutiny from other parts of the government. Depending on which wing of the party seals the nomination, tech could be facing a very different regulatory environment in the event of a Democratic win come November.