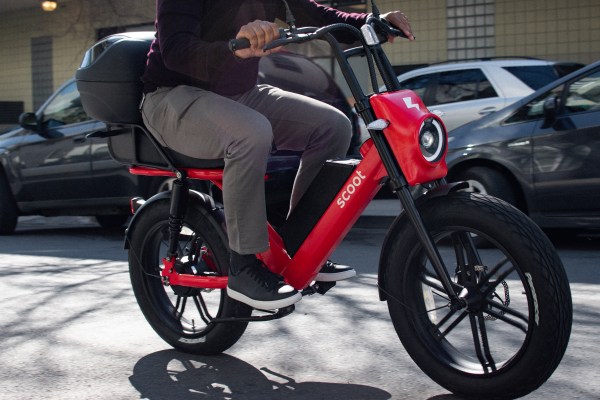 The Scoot Moped — an electric moped born out of Bird’s acquisition of Scoot — will launch in Austin five months after unveiling the shared micromobility vehicle.

The new moped is the latest effort by Bird to diversify its product offerings to capture more customers. The Scoot Mopeds, which are now available on the Bird app, feature large-volume tires, hydraulic disc brakes, two side mirrors, an LCD display for vehicle speed information, as well as two sizes of helmets, which are stored in a box on the vehicle. Users of the Scoot Moped must be 18 years or older and have a valid driver’s license.

Bird first unveiled the Scoot Moped in October following its acquisition of Scoot. Initially the mopeds were piloted in Los Angeles, according to Bird. The Austin launch, which kicks off the week before the city’s SXSW music, tech, film and comedy festival begins, marks the official rollout of the Scoot Mopeds. The SXSW festival has not been cancelled yet, although numerous companies are pulling out over concerns of the coronavirus. SXSW organizers said March 2 that the “2020 event is proceeding with safety as a top priority.”

The Scoot Mopeds will join a bevy of shared mobility vehicles that are already on Austin’s city streets. The Austin City Council approved in February 2018 the creation of a “dockless” bike-share pilot program. Some companies were already operating these services; this action created a regulatory framework. But then scooters came en masse.

The scooters upended bike share, and prompted companies to take some of their bikes off the streets due to lack of demand, according to several city officials who spoke to TechCrunch during SXSW 2019.

Bird is “working closely with the city to help achieve the goal of 50-50 mode shift by 2039 and looks forward to collaborating on more solutions in support of the Austin Strategic Mobility Plan,” Blanca Laborde, a government partnerships team member for Bird, said in a statement. “We think Austinites are going to love this new way to get around.”