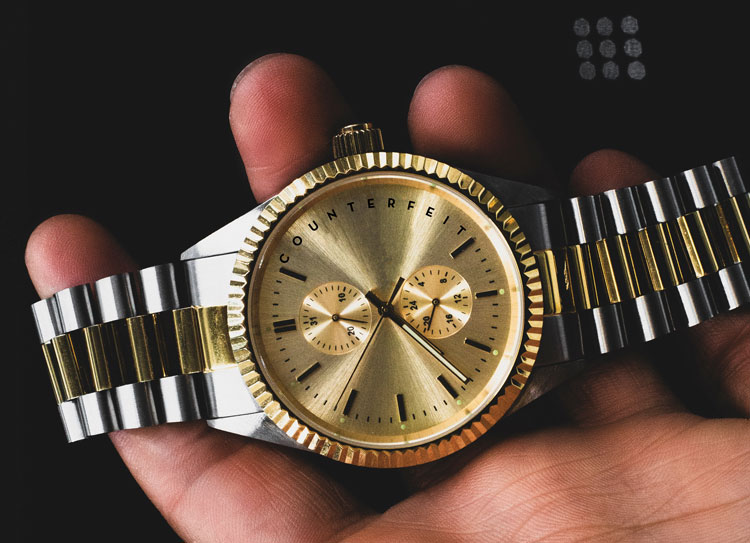 It was a gorgeous spring day in May 2012 when a woman walked into a souvenir shop on Canal Street in New York City looking for a bargain price on an Omega watch.

Omega watches can cost $20,000 or more, but the clerk in the shop at 375 Canal St. ducked into a hidden storage room and brought out something much cheaper: a pair of watches, smartly appointed with the iconic brand’s marks but priced far lower.

The woman paid $80 for one. The clerk handed her the watch in a zip-close bag.

Unbeknownst to the seller, though, the shopper wasn’t a typical Canal Street consumer giddy about getting what looked like a brand-name watch at a steep discount.

She was working for an investigative firm hired by Omega and Swatch, which had been battling counterfeit sales for years.

And now, the world-renowned watchmaker would set its sights not on the counterfeit manufacturer or the illegal seller: It would focus on the building’s owner.

At trial, attorneys for the watch company in the case Omega v. 375 Canal Street in U.S. District Court for the Southern District of New York would offer plenty of evidence that the landlord knew about illegal activity in the building.

In previous years, the property had been raided multiple times by police for counterfeit activity, and the landlord had been sued by New York City and by Louis Vuitton, which alleged fake handbags were being sold. To settle the Louis Vuitton complaint, the landlord had agreed to hire a private investigator to monitor its property—but stopped when the agreement ended.

Omega also had notified the landlord about the activity by letter.

It took an expensive seven years for the case to come to trial, attorney Robert J. Gunther Jr. of WilmerHale, representing Omega, told jurors in his closing argument. “But Omega and the Swatch Group decided not to settle this case. They decided to invest the time and give us the resources to take this case to trial in the hope of breaking the endless cycle of counterfeiting” and “send a broader message.”

In March, the jury found in favor of Omega, saying the building owner had contributed to the trademark infringement with its “willful blindness” to the activity. Attorney Avi Schick of Troutman Sanders, representing 375 Canal, had argued at trial that the Omega investigation was sloppy and that the building owner “had a soft spot” for small merchants, and that in any case, the landlord did not exhibit “willful disregard” toward Omega’s trademark. The jury awarded Omega $1.1 million.

The landlord’s attorneys, with Troutman Sanders, filed an appeal in September, arguing that Omega hadn’t proven the landlord knew that this specific vendor was selling counterfeit Omega watches—and further arguing that the damages were wrongly inflated. But if the verdict stands, the case will be part of a growing body of law showing that commercial landlords can be held liable for the illegal actions of their tenants.

“The decision is absolutely correct, and the law has been moving in this fashion for quite a while,” says James L. Bikoff, a partner in the intellectual property practice of Smith, Gambrell & Russell in Washington, D.C.

“Landlords can’t just look the other way,” Bikoff says. “They have to take action, and if they don’t take action, they can be held liable.”

Counterfeits are big business, estimated at $509 billion worldwide in 2016. Increasingly since the 1990s, brands are finding a strategy in going after commercial landlords, who often have deeper pockets than the sellers.

Property law expert Richard Epstein says the Omega decision “is not a hard case” given the building’s history of police raids and interactions with brands that were harmed.

“Unless there’s smoke, you don’t have to go around looking for fire,” says Epstein, a law professor at New York University and the University of Chicago. But, he adds, once a landlord is made aware, he’s duty-bound to do something. “You have to hop on it.”

A case with similar facts—Luxottica Group, S.p.A. v. Airport Mini Mall in U.S. District Court for the Northern District of Georgia, in which a discount mini-mall owner was found liable for $1.9 million in damages for a subtenant selling fake designer sunglasses—was upheld by the Atlanta-based 11th U.S. Circuit Court of Appeals in August.

As with the Omega case, the property in the Luxottica case had been raided by police multiple times, and the brand had sent letters notifying the landlord about the illegal activity.

The Lanham Act, passed by Congress in 1946, is the federal statute governing trademarks. It set up procedures for registering trademarks and states that trademark owners can seek protection from infringement in the federal courts.

But the Lanham Act doesn’t delve into indirect trademark infringement. So lawyers have had to apply common law theories of indirect tort liability in bringing their cases. To prove contributory liability, plaintiffs must show that the landlord had control over the means of infringement (i.e., the building, which the landlord fills with its own tenants) and that the landlord knew about the illegal activity.

Numerous cases underpin this theory, including:

• Inwood Laboratories Inc. v. Ives Laboratories Inc.,in which the U.S. Supreme Court in 1982 held that a generic drugmaker could be held liable for independent pharmacists that intentionally mislabeled the generic version of a drug as being brand-name medicine.

• Hard Rock Cafe Licensing Corp. v. Concession Services Inc.,a 1992 case in the Chicago-based 7th U.S. Circuit Court of Appeals, which extended liability to a flea market owner because of its “willful blindness” toward a vendor’s sale of counterfeit T-shirts.

Given the scale of the problem—and the fact that many counterfeit goods are produced overseas—going after commercial landlords can be a smart strategy for brands, experts say.

Roxanne Elings, a leading trademark and brand management attorney and partner with Davis Wright Tremaine in New York City, has been fighting counterfeiters since the mid-1990s, when she pursued a civil case against the owner of the then-notorious 1165 Broadway building. At the time, peddlers of fake products “would line up to go there with their big plastic bags and get their counterfeit goods there and sell them on the street,” Elings says.

Elings’ civil suit, brought in tandem with a criminal crackdown by city officials, helped shut down the operation. “It was the last time 1165 Broadway was used for counterfeiting,” she says.

Elings suggests brands that get wind of counterfeit sales carefully document which goods are being offered and find out whether law enforcement officials have already taken action there.

Companies should memorialize the illegal activities in a cease-and-desist letter to the landlord.

The law doesn’t say landlords need to act like cops. But experts say they should screen tenants and keep tabs on what they’re selling.

Heather Kliebenstein, a partner at Merchant & Gould in Minneapolis, says intellectual property lawsuits often take defendants by surprise because the owners figure this isn’t their problem.

Landlords should take a fresh look at their leases and make sure they not only have language addressing illegal activity but also provisions for indemnification, insurance and access rights, says Michael Pollack of Ballard Spahr, who has more than 30 years of experience in commercial real estate law in the New York City metro area.

A lease should allow the landlord to access any storage areas if they “have reason to know or expect” that counterfeit sales are happening.

The landlord also should make sure each tenant has adequate insurance in case the landlord is hit with monetary damages.

Large firms with many commercial buildings may have a hard time keeping track of each tenant. But if they know—or have reason to know—that there’s something fishy happening inside, a landlord needs to act immediately, Pollack says.

“Once you have notice of a claim, you have an obligation to act. There is no ostrich defense,” Pollack says.

The theory of contributory liability is also being used with online sales platforms. And just like with a brick-and-mortar landlord, whether the virtual “landlord” acted to stop the activity makes a difference.

In Tiffany (NJ) Inc. v. eBay Inc., the New York City-based 2nd U.S. Circuit Court of Appeals in 2010 affirmed that eBay was not liable for infringement because it had mechanisms in place to remove rogue sellers. Because both real and fake Tiffany items appeared on its vast list of items, eBay couldn’t be expected to know the status of each one. But when notified of a fake, eBay would immediately delist the vendor.

As the lawsuits pile up, anti-counterfeit organizations are highlighting the connections between counterfeit products and international criminal networks. As a result, some consumers—especially younger, more socially conscious shoppers—are no longer giggling about scoring a fake bag or piece of jewelry.

But until sales dry up, brand owners have a powerful legal avenue in going after landlords, Bikoff says. “Landlords should be good citizens. And selling counterfeit goods is illegal.

This article ran in the Winter 2019-2020 issue of the ABA Journal with the headline “When Landlords Pay: Commercial landlords are increasingly found liable for actions of rogue tenants who sell counterfeit goods.”