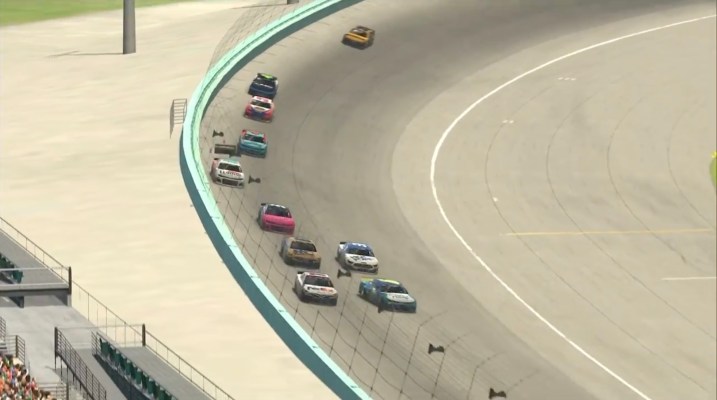 Fox Sports said Tuesday it will broadcast the rest of the eNASCAR Pro Invitational iRacing Series, following Sunday’s virtual race that was watched by 903,000 viewers, according to Nielsen Media Research.

While those numbers are far below the millions of viewers who watch NASCAR’s official races — the last one at Phoenix Raceway reached 4.6 million — it still hit a number of firsts that Fox Sports found notable enough to commit to broadcasting the virtual racing series for the remainder of the season, beginning March 29.

The races will be simulcast on the FOX broadcast network, Fox Sports iRacing and the FOX Sports app. Races will be available in Canada through FOX Sports Racing.

Virtual racing, which lets competitors race using a system that includes a computer, steering wheel and pedals, has been around for years. But it’s garnered more attention as the spread of COVID-19, the disease caused by coronavirus, has prompted sports organizers to cancel or postpone live events, including the NCAA March Madness basketball tournament, NBA, NHL and MLB seasons as well as Formula 1 and NASCAR racing series.

NASCAR ran its first virtual race in the series on Sunday in lieu of its planned race at the Homestead-Miami Speedway, which was canceled due to COVID-19. Not only was it the most watched esports event in U.S. television history, it was Sunday’s most-watched sports telecast on cable television that day.

“This rapid-fire collaboration between FOX Sports, NASCAR and iRacing obviously has resonated with race fans, gamers and television viewers across the country in a very positive way,” Brad Zager, FOX Sports executive producer said in a statement. “We have learned so much in a relatively short period of time, and we are excited to expand coverage of this brand-new NASCAR esports series to an even wider audience.”

Granted, there aren’t any live sports to watch in this COVID-19 era. Still, it bodes well for the future of esports, perhaps even after the COVID-19 pandemic ends.

“The response on social media to last Sunday’s race has been incredible,” said four-time NASCAR Cup Series champion Jeff Gordon, who is announcer for Fox NASCAR. “We were able to broadcast a virtual race that was exciting and entertaining. It brought a little bit of ‘normalcy’ back to the weekend, and I can’t wait to call the action Sunday at Texas.”

You can see what the virtual racing looks like here in this clip from Fox Sports.

NASCAR isn’t the only racing series to turn to esports. Formula 1 announced last week that it would host an esports series, the F1 Esports Virtual Grand Prix series, with a number of current F1 drivers alongside a number of other stars.

The virtual Formula 1 races will use Codemaster’s official Formula 1 2019 PC game and fans can follow along on YouTube, Twitch and Facebook, as well as on F1.com. The races will be about half as long as regular races, with 28 laps. The first race took place March 22. The first-ever virtual round of the Nürburgring Endurance Series kicked off on March 21.