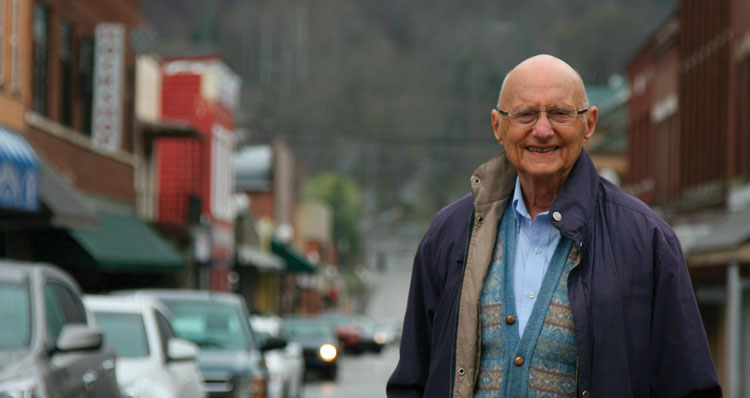 John Rosenberg likes to tell people we’re in a country where the rule of law means something, where no one is above the law.

“Lawyers make a difference,” he says. “We have demonstrated in our work that we can have a great impact and make our society a better one.”

That message carries immense weight coming from a Holocaust survivor who immigrated to the United States as a child and turned his persecution into a passion for public service.

As a civil rights attorney with the Department of Justice, he fought discrimination and segregation in the South during the 1960s. Later, as the founder and director of the Appalachian Research and Defense Fund, also known as AppalReD, in Prestonsburg, Kentucky, he provided people living in poverty with free legal aid for more than 30 years.

Rosenberg, who is now 88, didn’t stop there. He co-founded the Appalachian Citizens’ Law Center, a nonprofit law firm that represents coalminers and their families. He became of counsel to local firm Pillersdorf, DeRossett & Lane, where he is connecting hundreds of eastern Kentuckians who lost their disability benefits with attorneys.

Former Kentucky Public Advocate Ed Monahan, who served on the board of directors for AppalReD, describes Rosenberg as possessing a “fierce, indefatigable love of neighbor.”

“As I think about him and where he came from in Germany, what he has been through, what he has chosen to do and how he conducts himself, I see him as a minister of hope and justice,” Monahan says. “He is always fighting. He is always hopeful.”

Rosenberg was born in Magdeburg, Germany, a city about 100 miles from Berlin. His family lived next to the synagogue where his father taught Jewish students after they were no longer allowed to attend public schools.

On Nov. 9, 1938—known as Kristallnacht, or Night of Broken Glass—Nazi soldiers forced his family out of their home and into the courtyard. The soldiers took religious scrolls and books from the synagogue and burned them. Then they blew up the synagogue.

“We stood there,” Rosenberg says. “I was 7 years old; my brother was 2 and was in my mother’s arms.”

The next morning, soldiers arrested his father and took him to Buchenwald. He was in the concentration camp for more than a week, but he was released after local authorities intervened. He was given 30 days to leave the country.

Rosenberg and his family fled to the Dutch port city of Rotterdam, where they stayed in an internment camp for a year before boarding a ship set for the United States. “We were able to get out of Holland on virtually one of the last ships,” he says. “My uncle, my father’s brother, was to be on the next ship. He put his luggage on, and the ship left, but it turned around and came back because they started bombing. He didn’t make it.”

The Rosenbergs landed in New York and moved in with his mother’s family in Manhattan. Rosenberg started school and began learning English in a class with other immigrant students.

His father couldn’t find a job and went to Spartanburg, South Carolina, to work as a janitor in a textile mill nearby. The local Jewish community learned about his knowledge of their religion and culture and asked him to officiate at services.

Rosenberg, his mother and brother moved to a nearby town when he was in the fourth grade. Three years later, his family moved to Gastonia, North Carolina, where his father also officiated at Jewish services.

He assimilated to American life in Gastonia, becoming an Eagle Scout, a camp counselor and class president during his sophomore and senior years of high school. He went to Duke University, graduated with a bachelor’s degree in chemistry in 1953 and joined the U.S. Air Force. He became a navigator and was stationed in England for nearly three years. After being honorably discharged with the rank of captain, he moved to Philadelphia to work for a chemical manufacturer.

Rosenberg decided legal knowledge would be a useful skill and enrolled in the University of North Carolina School of Law, graduating in 1962. An unforgettable experience he’d had in the Air Force influenced his next move.

One of his friends was an African American radar operator from South Carolina. They brought an airplane from England to New York and decided to visit their families. They were riding the train together to Washington, D.C., when his friend stood up suddenly.

“He said he would see me back in England. ‘I’m going to the back of the train, where the blacks sit,’ ” Rosenberg says. “I always thought that probably was an experience that moved me to going to work for the civil rights division.”

Right to the South

Rosenberg worked on one of the first cases brought under the Voting Rights Act of 1965. By May 1966, a large number of black voters had registered in Dallas County, Alabama. Sheriff Jim Clark, who had tried to keep blacks from voting, was running for reelection in the first primary following the law’s passage.

Rosenberg recalls that counting the ballots took a long time, and when six predominantly black wards hadn’t finished by late evening, the county’s Democratic Executive Committee picked up the boxes and refused to count their ballots.

“We filed a civil rights action to require them to include the ballots,” Rosenberg says. “We weren’t talking about who would win or lose, but the ballots in those boxes needed to be counted.”

Rosenberg’s boss, Assistant Attorney General John Doar—who later received the Presidential Medal of Freedom—surprised him by asking him to present the government’s case.

“We were before Judge [Daniel] Thomas, which we were worried about because he had been slow in desegregating schools and was more conservative,” Rosenberg says. “But Judge Thomas ordered that the ballots be counted, and the result of that counting was that Jim Clark was out.”

“The validity of the indictments went to the United States Supreme Court and back, and immediately there were convictions of seven of those folks,” Rosenberg says. “Eventually the perpetrators went to jail.”

He handled other voting rights, school desegregation and employment discrimination cases, and he was chief of the division’s criminal section when he left in 1970 to go on a monthslong camping trip with Jean and their infant son. That road trip changed the trajectory of his career.

The family was passing through Canada when a former colleague contacted Rosenberg about a group of lawyers in Appalachia who needed help addressing legal issues related to poverty.

Rosenberg drove his family to Prestonsburg, where he heard about the devastation caused by strip mining, unsafe mine conditions and black lung disease. He also heard that area hospitals wouldn’t serve people who didn’t have any money.

He opened the Kentucky office of AppalReD, a federally financed legal services program based in Charleston, West Virginia. A month after he arrived, an explosion ripped through a mine in nearby Leslie County, killing 38 miners. He represented the sole survivor and discovered that mine operators used illegal explosives and neglected safety requirements.

“We continued to see that over time; folks who didn’t want their land mined and coalminers who complained about safety conditions needing legal representation,” Rosenberg says. “Many members of the bar in this rural area were retained by coal companies. That was part of the genesis of why we came.”

Rosenberg also helped with family, consumer, housing and disability issues during his long tenure with AppalReD, which split from the West Virginia office and became a separate organization in 1973.

The legal services program gradually grew to nearly a dozen offices and 50 lawyers and staff, Rosenberg says. Despite years of funding cuts, it still operates six offices and serves thousands of low-income clients in 37 counties in Kentucky.

“As far as legal services goes, every case is important,” Rosenberg says. “It’s an invaluable service when you save someone’s home from foreclosure or you help a veteran with housing. And when you have people who devote their careers to that, it’s a great thing.”

Rosenberg has been the director emeritus of AppalReD since 2002 and serves on the boards for the Kentucky Equal Justice Center, East Kentucky Leadership Foundation and East Kentucky House of Hope homeless shelter. He and Jean have worked on several other efforts to improve their community, including opening the East Kentucky Science Center. Former Kentucky Supreme Court Justice Janet Stumbo has known the Rosenbergs since the 1980s and recognizes the positive changes they have made in their state.

“They—meaning John and Jean—just have a vast affection for the region, for the people they have worked with,” she says. “It’s been a real blessing for eastern Kentucky to have them here.”

Members Who Inspire is an ABA Journal series profiling exceptional ABA members. If you know members who do unique and important work, you can nominate them for this series by emailing inspire@abajournal.com.