Newman’s was founded by Elsen Wiraatmadja, Alfred Ali and Anthony Suryaputra and motivated partly by their own experiences with hair loss in their twenties. 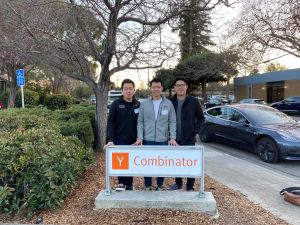 “It was a rather depressing period. It affected our confidence, our jobs and we didn’t know who to talk to and what to do,” says Suryaputra. “Even going to the doctor for treatment was an awkward process and it was expensive to pay for medications. We talked to other men and they faced the same issues.”

Hair loss treatments with minoxidil and finasteride, the two most common clinically-proven ingredients, require a prescription in Indonesia and it can be difficult to book consultations since the country has a relatively low number of physicians. The price of a doctor’s visit, which the founding team says is usually about US $30, and treatments, is also prohibitive for many people.

Newman’s works directly with manufacturers for its hair loss products, which contain minoxidil and finasteride. By cutting out distribution and retail middlemen, their margins are higher, and they use some of that revenue to pay doctors on the platform. This enables them to make consultations free and also offer a 100% money-back guarantee to encourage patients to use products for at least three months, since it usually takes that amount of time to see results.

For doctors, online consultations through Newman’s platform saves time and allows them to see more patients. Before booking an appointment for hair loss, Newman’s users complete a questionnaire and upload photos, which help their doctors determine treatments and shorten consultation times for hair loss to as little as five minutes. There are currently about 15 doctors on Newman’s (with plans to add more from a waiting list) who see about 10 to 15 patients through the platform per day.

The startup will launch in other men’s health verticals before expanding into women’s health, with an emphasis on issues that patients are often reluctant to seek help for because of stigma or cost.

“Right now we’re focused on hair loss because it personally affects us and a lot of other men,” says Suryaputra. “With other verticals, like erectile dysfunction, there are the same dynamics. It’s embarrassing and in Southeast Asia, the taboo around erectile dysfunction is a lot stronger than in the United States.”

Newman’s will continue to focus on Indonesia, where data from the World Bank shows there are much less physicians per 1,000 patients than in the United States or nearby countries like Thailand and Singapore.

“We cannot create more doctors, so we have to make seeing patients more efficient for them,” says Suryaputra.