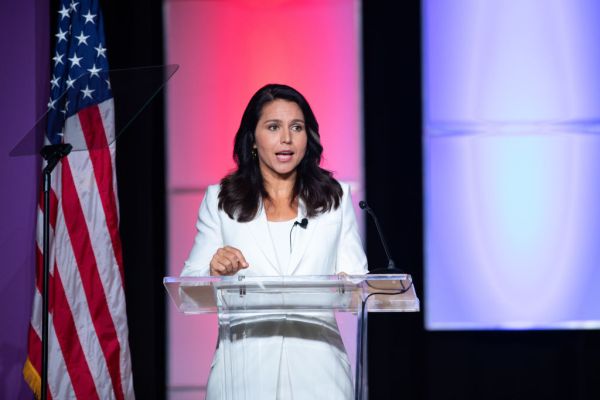 Gabbard’s campaign, Tulsi Now, Inc., asked for $50 million in damages from Google for “serious and continuing violations of Tulsi’s right to free speech.” In the suit, her campaign claimed that Google “helps to run elections” through political advertising and search results — an argument District Judge Stephen Wilson firmly rejected.

In dismissing the case, Wilson writes that what Gabbard “fails to establish is how Google’s regulation of its own platform is in any way equivalent to a governmental regulation of an election.” When it comes to Google, “an undisputedly private company,” the First Amendment’s free speech protections do not apply. A week ago, another California court reached the same conclusion in a case that right-wing group PragerU brought against YouTube.

In a case of poor timing, Gabbard’s account was suspended for an interval of time following the first presidential debate as viewers sought information about the unfamiliar candidate. In the lawsuit, Gabbard noted that Google took her advertising account offline “in the thick of the critical post-debate period.”

TULSI2020: In the hours following the 1st debate, while millions of Americans searched for info about Tulsi, Google suspended her search ad account w/o explanation. It is vital to our democracy that big tech companies can’t affect the outcome of elections https://t.co/n7Y7y2dQZ9

“Since at least June 2019, Google has used its control over online political speech to silence Tulsi Gabbard, a candidate millions of Americans want to hear from,” the suit stated.

“This is a threat to free speech, fair elections, and to our democracy, and I intend to fight back on behalf of all Americans,” Gabbard said in a statement at the time.

Gabbard also decried Google’s dominance of the search business, echoing the anti-monopolist tech sentiments expressed by other Democratic candidates. Political figures in both parties have seized on anti-tech sentiment in recent years, and the Hawaii representative’s lawsuit is just one example of politically expedient posturing against major tech platforms.

After the incident, a Google representative explained that the platform automatically flagged Gabbard’s account for unusual activity, a mistake it corrected a short time later.