Toys are better now. There, I said it. Don’t get me wrong, I treasure the tub of action figures gathering decades of dust in my parents’ attic, but get a load of this Super Mario Lego play set. I would have happily used up all the nights of Hanukkah on the thing.

Caveats: I haven’t seen it in person. As of the positing of this, you’ve seen exactly as much of it as I have. There are still a ton of questions Lego couldn’t answer yet during our meeting, including important stuff life pricing and timing (beyond later this year). And yet, all the nostalgia receptors are firing at once, playing a familiar selection of chip tune hits.

What the company did tell me is that the product is the result of a four-year collaboration. In Lego’s words, “it turned out to be complex to create something simple.” The “simple” thing was the same code decades of IP partners have tried — and often failed — to crack: how to best bring Super Mario Bros. into the real world. Here, it means a play set that lets kids build and play their levels — essentially taking a page out of the successful Mario Maker franchise.

The key to the set is the Mario figure. Far and away the most sophisticated of the bunch, it features four built-in LEDs (two eyes, a mouth and a chest), designed to interact with the play set. There’s even a speaker that plays recordings from long-time Mario voice, Charles Martinet. The secret sauce here are color sensors built into the bottom of the plumber’s feet. Through these, the figure determines which blocks he’s hoping on and switches his displays accordingly, whether it’s a big smile or a pained grimace. 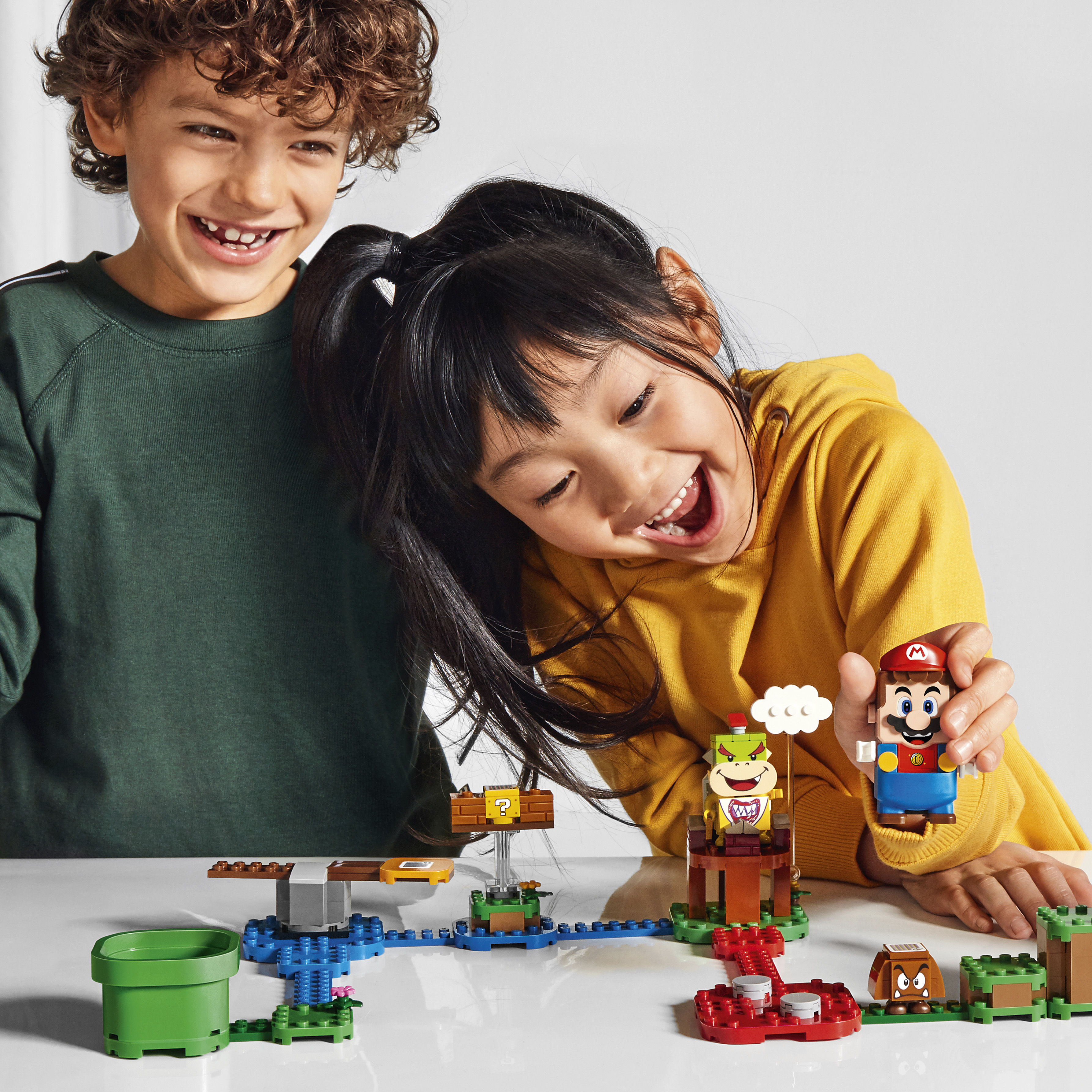 Speaking of switches, there’s no gameplay element to Nintendo’s latest console. That’s a little disappointing from an interactive standpoint, but good for parents who can feel comfortable buying a Lego set without having to shell out for a video game system. There may, at some point, be other connected elements. Smartphone/tablet functionality seems like a no-brainer, but Nintendo and Lego haven’t revealed any of those specifics yet.

Nor will they discuss if there are other sensors on board, like a gyroscope or accelerometer, so the system knows when Mario is on the move. There are on-board batteries to power Mario’s emotions, but we can’t say yet whether he’s rechargeable or they’re replaceable. More details as we get closer to release — whenever that might be. 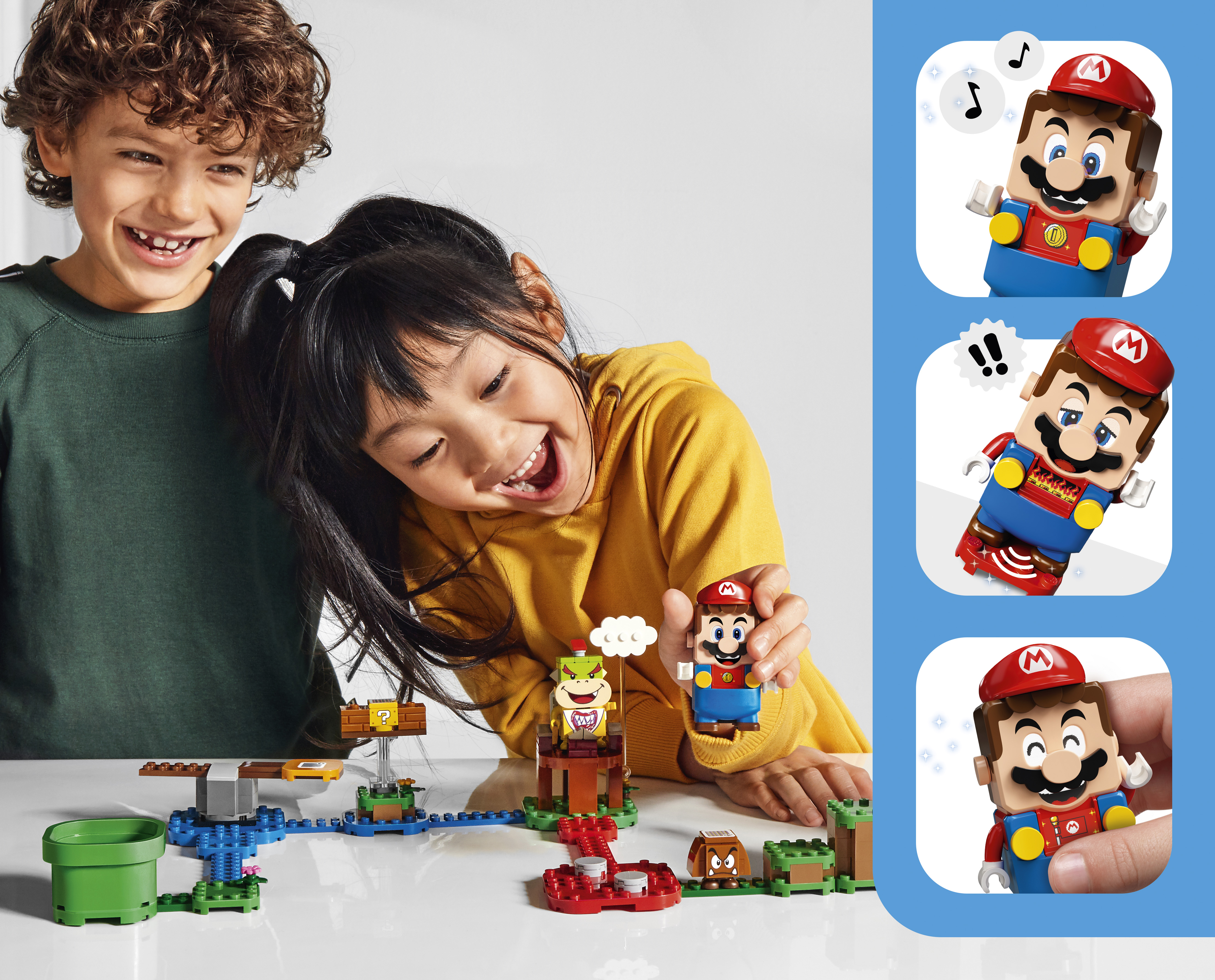 There’s no specific on-board scoring system that I’m aware of, and while there’s a countdown clock to finish the levels you create, you’re on the honor system as far as playing them the right way. Unless, of course, you’re playing with a friend, in which case, they’ll likely be happy to keep you honest.

There are a number of familiar faces, including Shy Guys, a very cool Piranha Plant and, of course, Yoshi, but Mario is the one piece with sensors and a brain on-board. At least for now. One of the beauties of Lego kits is that they are, by their very nature, expandable. The kit will also work just fine with standard Lego pieces, as ever.

“I have always liked LEGO products and how they help children use their imagination to play,” Nintendo’s  Executive Officer and Game Producer Takashi Tezuka said in a release tied to the announcement. “The new product we created together with the LEGO Group seeks to combine two different styles of play – one where you freely build the world of Mario and the other where you play with Mario in the very world that you have created.”

Again, more info to come, but I certainly know a lot of kids (and adults) who are going to be counting down the days on this one.