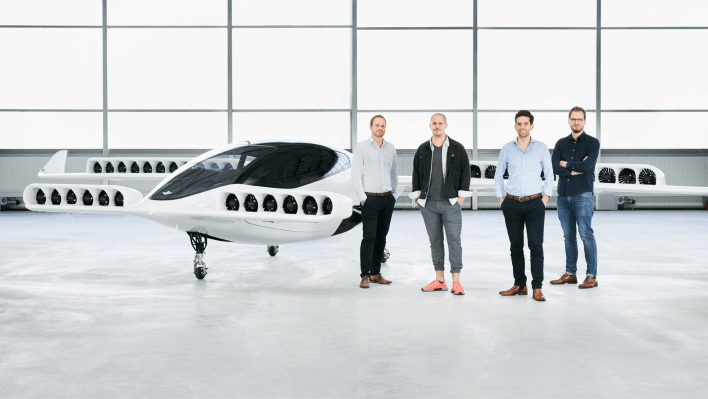 Long and short distance travel have all but stopped for many people at the moment. But looking forward to a time when that may no longer be the case, a company designing flying taxis is today announcing a large round of funding to help continue developing its product.

Lilium, a Munich-based startup that is designing and building vertical take-off and landing (VTOL) aircraft with speeds of up to 100 km/h that it plans eventually to run in its own taxi fleet, has closed a funding round of “over” $240 million — money that it plans to use to keep developing its aircraft, and to start building manufacturing facilities to produce more of them, for an expected launch date of 2025.

“We’re working to deliver a brand new form of emissions-free transport,” said a spokesperson. “Doing something like that takes significant time and investment, but the outcome is a valuable business and a chance to have a genuinely positive impact on the way we travel.”

This latest investment was an inside round (involving existing, not new, investors) and it closed last month. It was led by Tencent, with participation from other previous backers that included Atomico, Freigeist and LGT. The valuation is not being disclosed, but the company confirms that it is significantly higher than it was in its Series B in 2017. (For some more context, PitchBook estimates that last year the company was valued at around $470 million.)

The news today caps off some challenging recent months for the company, even before the Coronavirus took hold of the world and cast a dark shadow on any kind of travel.

Last October, we reported that several sources said that Lilium, which employs 400 people, was looking to raise between $400 million and $500 million, a round that it had been working on for some months. In the end, the lower amount the company is putting out today is $160 million less than the lower end of that range, but from what we’ve been told, this is not far from what the company was actually aiming to raise. Still, that combined with the fact that there are no new investors in the raise might imply some challenges there.

(It is, nevertheless, one of the biggest fundraises to date for a startup in the “flying vehicle” space. (Volocopter, which is also designing a new kind of flying taxi-style vehicle and service, closed a $94 million round in February.) Lilium has now raised more than $340 million to date.)

“This additional funding underscores the deep confidence our investors have in both our physical product and our business case. We’re very pleased to be able to complete an internal round with them, having benefited greatly from their support and guidance over the past few years,” said Christopher Delbrück, Lilium’s CFO, in a statement. “The new funds will enable us to take big strides towards our shared goal of delivering regional air mobility as early as 2025.”

But raising money has not been the only challenge. At the beginning of this month, the older of Lilium’s two prototypes burst into flames while some maintenance was being carried out. The model was close to being retired, but testing on the second, newer model has nonetheless been paused until the company can determine the cause of the accident with the first aircraft.

“Our second demonstrator aircraft was fortunately undamaged in the fire and will begin flight testing once we’ve understood the cause of the fire in the first aircraft,” a spokesperson said.

The market for aircraft-based taxi services — be they electric, autonomous, or both — is still very nascent. There are no approved aircraft yet on the market (indeed, the regulations for what these would even look like haven’t even been created), and, as a result, there are no services yet in place, either.

But the opportunity of building fast services that could mitigate current traffic congestion, while also reducing carbon emissions, is potentially massive, and so we are seeing a lot of activity and investment from many corners as companies hope their takes on solving that challenge are the ones to hit the mark.

Lilium’s would-be rivals include not just fellow German startup Volocopter, but also Kitty Hawk, eHang, Joby and Uber, in addition to Blade and Skyryse, air taxi services of sorts that offer more conventional helicopters and other vessels in limited launches for those willing to spend the money.

It’s not clear how much of this will fare in the months and years ahead, in particular at a tricky time for travel and the wider economy. But for now, Lilium’s work so far — it was founded in 2015 by Daniel Wiegand (CEO), Sebastian Born, Matthias Meiner and Patrick Nathen — has been promising enough for its investors to continue backing it for the long haul.

“At Tencent we’re committed to supporting technologies that we believe have the potential to tackle the greatest challenges facing our world,” said David Wallerstein, Chief eXploration Officer at Tencent, in a statement. “Over the last few years we’ve had the opportunity to see the professionalism and dynamism with which Lilium are approaching their mission and we’re honored to be supporting them as they take the next steps on their journey.”