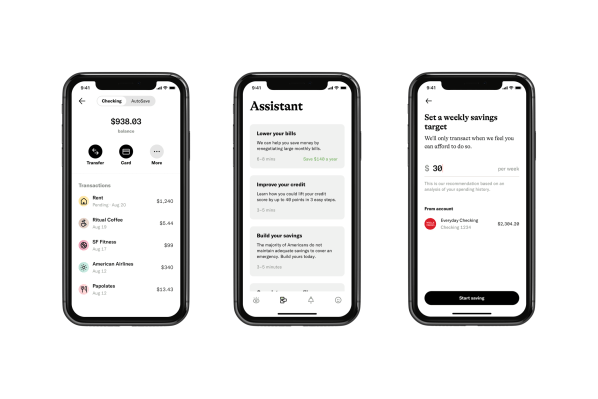 Another afternoon, another round of funding for a mobile banking app. This time, it’s Empower Finance, a San Francisco-based company that’s headed up by former Sequoia Capital partner Warren Hogarth and which just closed on $20 million in Series A funding from Icon Ventures and Defy Ventures.

David Velez, who is the founder and CEO of Nubank, the largest fintech in Latin America, also joined the round.

We’d first written about the company in 2017, when Hogarth was just getting the business off the ground. Fast-forward a bit and Empower now employs 35 people and has attracted more than 600,000 active users to its platform, says Hogarth. What has drawn them in: the company’s promise of combining AI and actual human financial planners to help millennials in particular accrue some wealth, including, more newly, through its own checking account product and through a savings account that’s currently promising 1.60% in annual percentage yield with no minimums, no overdraft fees and unlimited withdrawals.

It’s all part of an overall offering that crunches through account holders’ bank and credit card accounts, and recommends how much they save into which account, how much they should spend given their overall picture, various ways they can cut costs and where and when they’ve surpassed their pre-configured budgets.

Of course, the company has so much competition it’s dizzying, but like the various upstarts against which it’s battling for mindshare, the opportunity that Empower is chasing is enormous, too. Though companies like Chime can seem overpriced given how fast investors have marked up their rounds — Chime’s newest financing, announced in December, was done at a $5.8 billion post-money valuation, which was four times more than the company was worth at the outset of 2019 — digital banks are still tiny fish in an ocean of institutional financial services, representing something like 3% of the market.

They’re gaining more market share by the day, too, including by charging far lower fees for much more.

In Empower’s case, users pay $6 a month, but Hogarth says they also save $300 a year in additional fees they would pay a brick-and-mortar bank. He insists that on average, it also helps them save $1,300 more annually, too.

As for all those other companies — Mint, Acorns, the list goes on — Hogarth sounds surprisingly sanguine. “If you look at it from the outside, it looks crowded. But the consumer financial services in the U.S. is a $2 trillion business, and we haven’t had a fundamental shift since maybe Schwab came along 30 years ago.”

Indeed, says Hogarth, because Empower and its rivals are mobile and branchless and don’t have legacy software to contend with, they’re able to take 60 to 70% of the cost structure out of the business.

What that means on an individual company level is that even if each upstart can attract 2 to 3 million customers, they can get to a multibillion-dollar market cap. At least, that kind of math is “why there’s so much interest in this space,” says Hogarth.

It’s also why people like Nubank’s Velez, who have seen this story play out in Europe and Latin America and who are seeing the early phases of it in the U.S., are apparently keeping the money spigot open for now.

Empower had earlier raised an undisclosed amount of seed funding from Sequoia, followed by a $4.5 million round led by Initialized Capital.