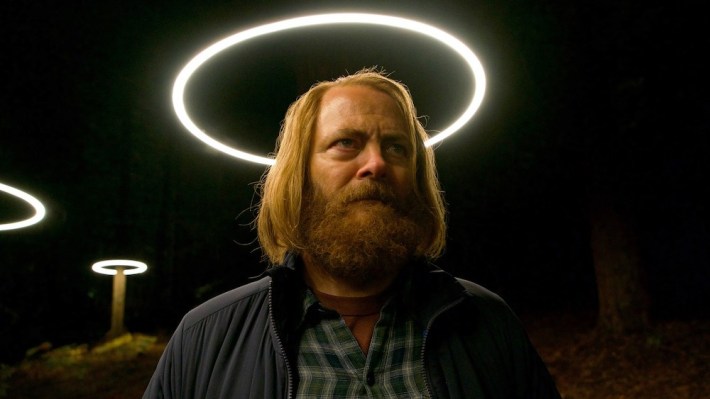 Given its name, you might expect “Devs” — which launched earlier this month on the new FX on Hulu — to be a “Silicon Valley”-style sitcom about the tech industry. And there are indeed some delightful moments where “Ex Machina” writer-director Alex Garland pokes fun at San Francisco and tech culture.

But the prevailing mood is one of mystery and dread. The show takes place largely at a fictional quantum computing company called Amaya, run by its brooding CEO Forest (played by Nick Offerman), which employs Lily (Sonoya Mizuno) and her boyfriend Sergei (Karl Glusman) . Amaya is also home to a division known as Devs — a group that’s mysterious enough that most employees don’t even know what the team is working on.

On the latest installment of the Original Content podcast, TechCrunch Events Director Emma Comeau joins us to discuss the three episodes that have aired thus far.

While it’s too early to evaluate how the show will answer its big questions, we’re all fans, thanks to its eerie visuals, impressive performances (particularly from Offerman and Mizuno) and the tantalizing way that it lays out its mysteries — during the spoiler discussion, we spent most of our time puzzling over clues about the ultimate goal of the Devs team.

And although the show is certainly tense, it’s actually something of a relief to spend a few hours worrying about sinister tech companies, rather everything else happening in the world outside.

You can listen in the player below, subscribe using Apple Podcasts or find us in your podcast player of choice. If you like the show, please let us know by leaving a review on Apple. You can also send us feedback directly. (Or suggest shows and movies for us to review!)

If you want to skip ahead, here’s how the episode breaks down: