Dish-owned TV streaming service Sling TV announced today it’s making a selection of its content available to stream for free, no credit card or account required. The free offering includes breaking news and live events from ABC News Live, movies and kids content for families, and other lifestyle and entertainment programming. The new service arrives at a time when a significant number of Americans are stuck at home due to the COVID-19 outbreak. But Sling TV isn’t just hoping for a little good press — it’s also marketing its paid service to the free users by promoting content that’s labeled as being only available to subscribers.

“Stay in & SLING,” as the free service is called, now includes thousands of shows and movies without the need to sign up.

The movie section is organized by category, including Horror, Action, Drama, and Popular. In the latter, you’ll find mostly older films and unknown titles.

There are also rows featuring free comedy standup specials, free true crime shows, free popular shows (e.g. “Rick and Morty,” “Impractical Jokers,” Samurai Jack,” and more), plus a section with “get a free taste” shows. This latter row is a selection of single free episodes from better-known shows like “Power,” “Vida,” “American Gods,” “The White Queen,” “Party Down,” and more hailing from Starz.

All this free content offered is sandwiched in between much more enticing paid fare — like rows featuring sports, news, and entertainment programs, each with big, yellow “Subscribe” buttons overtop the image thumbnail. So if you want to watch shows like “Friends,” “Sportscenter,” “Anderson Cooper 360,” or movies you’re more likely to have heard of, you’d have to pay. There’s also a giant ad for Sling TV at the top of the screen. 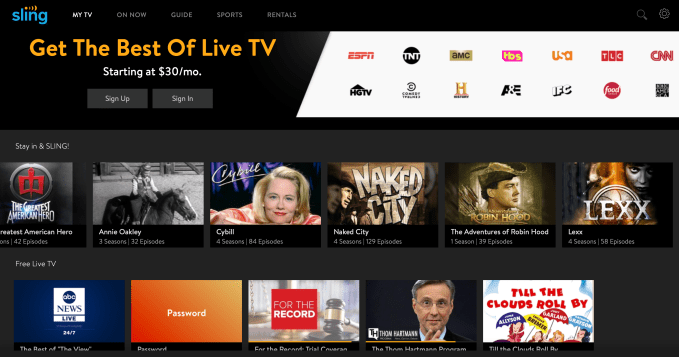 This setup is because Sling TV’s free tier isn’t something it just came up with to capitalize on the health crisis. Sling TV has offered a free selection in the past, in order to draw in potential subscribers. However, its free tier last year had included access to more than 100 hours of free shows and movies. The newly rebranded and relaunched free tier is larger, with thousands of movies and shows included.

Sling TV, however, is positioning the free service primarily as a way to help U.S. consumers keep up with the news during the coronavirus outbreak.

“To stay informed in these uncertain times, Americans need access to news from reputable sources,” said Warren Schlichting, Sling TV’s group president, in a statement. “With many Americans finding themselves staying at home, we have an opportunity to use our platform to help them deal with this rapidly evolving situation,” he said.

Sling TV had been in a rough situation before the COVID-19 crisis, with regard to subscribers, it’s worth noting.

The company reported its first-ever decline in Sling TV subscribers in the fourth quarter of 2019, with a drop of 94,000 customers to end the year with 2.59 million total subscribers. The decline is likely due to a number of factors, including price hikes, increased competition from rivals like Hulu with Live TV and YouTube TV, and new subscription services like Disney+ and Apple TV+ that are eating into consumers’ limited entertainment budgets.

Still, Sling TV is far from the only streamer looking to win viewership by marketing to homebound Americans during the COVID-19 outbreak.

Disney just released “Frozen 2” on its service, Disney+, a full three months ahead of schedule. Hulu released the first three episodes of “Little Fires Everywhere” early, as well. And NBCU is finally breaking the theatrical window to release “The Invisible Man” and other movies on-demand.

The Sling TV free experience is available through the Sling app for Roku, Amazon or Android devices or via the web using a Chrome, Safari, or Microsoft Edge browser.