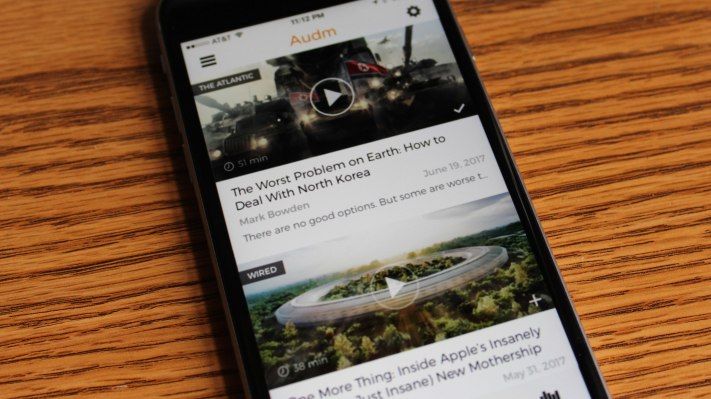 Audm, a startup that turns longform journalism into audio content, has been acquired by The New York Times Company, it announced this morning. While there are other services that turn news articles into audio, including read-it-later apps like Instapaper and Pocket, Audm differentiates itself by using professional voice actors to narrate the content, not automated voice technology.

That makes the content more enjoyable to listen to — more like listening to a podcast, for example.

The startup was founded by Ryan Wegner and Christian Brink, both 2007 Columbia grads with backgrounds in psychology and software development, respectively. The two didn’t know each other during college, but eventually met up in 2014 when their idea for an audio news app began to come together. Initially, the founders experimented with crowdsourced narration, but later landed on using professional voice talent to make their app stand out from others.

The company participated in Y Combinator’s startup accelerator in 2017 to further develop Audm’s business. At the time, Audm was working with a range of publishing partners, including Wired, The Atlantic, Esquire, Harper’s Bazaar, The New York Review of Books, ProPublica, London Review of Books, and several others. According to its website today, it also works with The Atlantic, Outside, BuzzFeed News, Vanity Fair, The New Yorker, New York, Rolling Stone, and TexasMonthly.

Of course, The New York Times had also worked with Audm, but on a more limited basis. Currently, Audm only has a couple of NYT stories available, and both are from 2019. That should soon change, given the new acquisition.

The app allows users to subscribe to Audm for $8.99 per month or $59.99 per year, after a 3-day free trial. The Times Company hasn’t yet offered any detail as to if or how its business model will evolve, or if Audm’s service will be further integrated with its own NYT app.

On the App Store, Audm was well-ranked as No. 20 in the Magazines & Newspapers category, according to its App Store profile. The app is also available on Android but is not well-ranked there.

Wegner, the director of spoken-word audio production, and Brink, director of product for Audm, as well as the rest of the team, are joining the Times Company as a result of the deal.