By Jenny B. Davis

As a busy general practice and land use lawyer, Rob Frost is accustomed to wearing many hats. Every summer, he adds one more: a baseball hat. Frost, who practices with the Knoxville, Tennessee, firm Arnett, Draper & Hagood, is part owner of the Forest City Owls of Forest City, North Carolina, one of the 16 baseball teams that make up the Coastal Plain League, a collegiate summer league. Every summer starting in late May, college players from across the country join these leagues to gain experience, improve their game and hopefully get scouted by Major League Baseball. Among Frost’s myriad ownership responsibilities: recruiting players, designing merchandise for the fan shop, selling program and outfield wall advertising, helping run the team’s social media accounts, planning various game-time activities like Owl Mania (with professional wrestlers), choosing the food and beverage lineup for the concession stands and anything else the team needs to make sure that all bases are covered.

I assume you’re a baseball fan. How did you happen to buy a team? 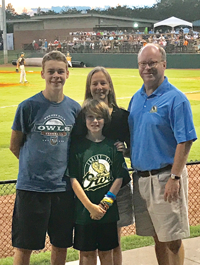 I have loved America’s game for a very long time. Over the years, I have been to about 90 major league, minor league and college baseball parks, and I try to go to new ones every year. Admittedly, with the players’ strike a long time ago, I got frustrated and quit paying attention to baseball for about a decade. I believe in baseball for relaxation, and taking away that element of summer was frustrating. Then one day about four years ago, I was in a colleague’s office and noticed a book on his desk about sports franchises. I asked about it, and he said he had a client looking at buying a baseball team. I said, if he’s interested in having a minority owner, let me know. I had lunch with the client the next day, and the rest is history!

You handle so much for the team, especially when it comes to sponsorships, events and promotions. Did you have to learn how to do that from scratch?

Not really. My late father and late grandfather were concert promoters in the entertainment business, so I’ve been around that type of business all my life. I learned to promote, to sell and to provide a good product. My father and grandfather promoted Liberace all over the Southeast. Numerous times we went to dinner with him, and he let my little sister wear all of his rings. When I was in college, my job one day was to drive around Dwight Yoakum and his band. Thanks to my father, [Luciano] Pavarotti once rehearsed to an audience of me and my then-girlfriend, who is now my wife. And two friends and I were the entire audience for an R.E.M. concert rehearsal. My grandfather was the promoter for [Sergei] Rachmaninoff’s last concert.

What an amazing family business! And yet, you decided to become a lawyer.

Concert promotion is high-risk, high-reward. I wanted a career that was less stressful.

I am not sure if law is less stressful! Or sports team ownership for that matter.

Baseball is relaxation for me, even if it involves ownership. The Forest City Owls make me incredibly happy. It’s the best nonpaying job I’ve ever had! But it pays in ways not measured by a profit-loss statement—especially when we’re winning. Of course, I approach games differently as an owner. I am always thinking, is the facility clean? Do things look nice? Is there a good food selection? A good beer selection? Ownership also gives me a creative outlet. I get to design T-shirts and hats and come up with crazy promotions. This year, we gave away a pickup truck. It was a used pickup, but it was a very popular promotion. We also have the Uncle Ray’s Chip Chase, where dozens of kids run across the field in between innings, chasing a person dressed up as a bag of potato chips while the “William Tell Overture” plays over the PA system.

That is both awesome and adorable. So I have to ask, are you the person who gets to dress up like a bag of chips?

I have not been the bag of chips yet, but I do have the costume at home. It got torn because the kids actually caught up with Chip, so he’s at home getting repaired.

I am sure Chip will be good as new by next summer! How do you sign sponsors for these promotions and find advertisers? Do you have a specific strategy?

A lot of it is cold-calling. I landed a regional grocery store chain by sitting at home one night just trying to figure out who to contact. We can come up with something no matter the size of your budget. Do you want to be in the program? Do you want an on-field promotion? Do you want to sponsor a bobblehead? I also make a point to always thank our supporters. When I am in Forest City, I eat at the restaurants that sponsor us. I send game videos. I send gear. We have one sponsor in Detroit—the Chip Chase people—and they probably have more Forest City Owls gear than anyone else in Detroit. It’s about being nice to people, treating them well and listening.

Sounds a lot like rainmaking in a law firm.

Law is often like baseball. It’s about working hard to provide a good product and good customer service. On occasion, I’ll connect the two and take clients to baseball games.

Has your affiliation with the Owls ever helped you in court?

A few judges around here will ask how the team is doing. It’s also a great icebreaker with opposing counsel, and if things aren’t going well between us but somehow baseball works its way into the conversation, it can be a great tension-dissolver.

It can be tough. With baseball, summer can be a blur, but practicing law always takes priority. During the season, my wife usually will drive us to the Owls game so I can work on the way. I also don’t do it alone: My business partner pours his heart and soul in the Owls, and he’s essential to our success.

Was there ever a time when you were like, “Uh-oh, what did I get myself into?”

Never. Even during the losses, even with bad calls from the umpire, deep down I always know things will change for the better. It’s important to be optimistic. But that’s the great thing about baseball: You can lose one day and win the next.

This article ran in the Winter 2019-2020 issue of the ABA Journal with the headline “A League of His Own: This Tennessee attorney is having a ball owning a baseball team.”