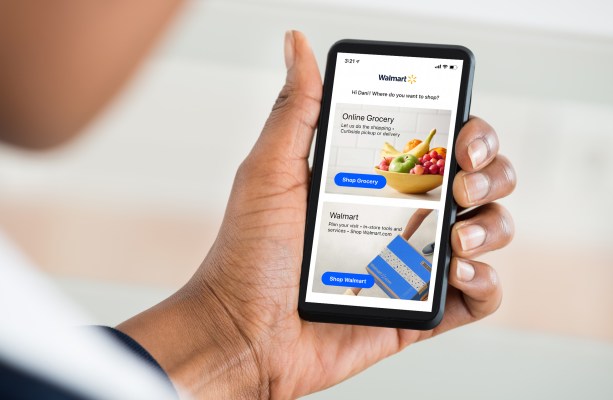 Walmart is looking to hook more consumers on its online grocery shopping experience by adding Walmart Grocery to its main Walmart mobile application. For years, the retailer has operated two separate apps: its flagship Walmart app (the blue one) and its separate Walmart Grocery app (the orange one). This meant shoppers would have to download and switch between two separate apps depending on what they were buying. This setup may have also limited Walmart Grocery’s reach, as some users of the larger and more popular app Walmart app may not have even realized online grocery was available.

According to data from Sensor Tower, Walmart’s main app has been downloaded 103+ million times since January 2014 across both iOS and Android. Today, it’s the No. 2 app in the iOS App Store’s Shopping section. Walmart Grocery, meanwhile, has seen over 16 million downloads across iOS and Android during that same time period. It’s also ranked further down as No. 30 in the Shopping section on the App Store.

For Walmart customers, the change means a more seamless shopping experience where they won’t have to think so much about what app to use, but can instead just shop for anything Walmart offers from a single place including its 120,000+ grocery items, local store inventory for pickup, and its online assortment of both first-party and third-party marketplace goods.

Over the course of the year, Walmart will transition its Grocery app user base to the main app and then sunset the standalone app when that’s been accomplished.

The company says these changes make sense because they better represent the way people shop, which isn’t a binary experience.

In addition, she says running two separate apps meant it was under-leveraging the relationship Walmart had with its regular Grocery app shoppers by limiting them to a standalone app where they couldn’t explore more of Walmart’s assortment.

The changes will also in time help simplify Walmart’s marketing budget, which currently has to send customers to two different places.

“As a marketer, that enables me to be more efficient with the dollars I spend and allows me to create much more compelling stories,” Whiteside noted.

The change may also give Walmart a competitive advantage versus Amazon, which today still offers grocery shopping (via two services, Amazon Fresh and Whole Foods) from both its main app and its separate Prime Now app, for faster delivery. This approach leads to customer confusion as there’s not just one simple way to order groceries from Amazon.

Walmart wouldn’t be the first to merge its separate apps. Target also recently integrated its Shipt grocery app with both its main Target app and website. However, Target is not sunsetting Shipt’s app as the business still serves other retailers.

Walmart says it will add Walmart Grocery to its desktop and mobile web experiences on Walmart.com, as well, instead of sending users to a separate domain. The Grocery section will also get a new look across platforms to better blend in with the Walmart.com design.

The updated Walmart app which includes Grocery is rolling out in phases, so you may not see it immediately.