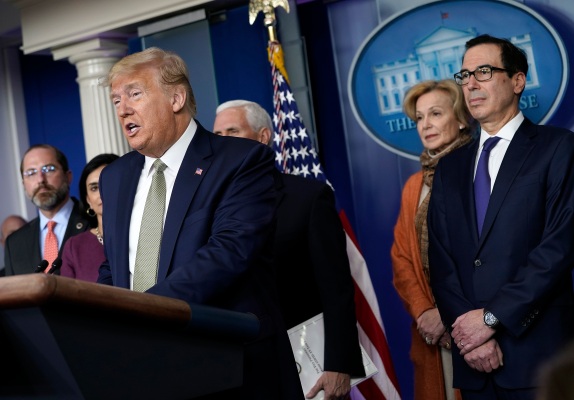 During a White House press briefing on the state of the COVID-19 pandemic in the U.S., members of the White House coronavirus task force provided updates about the current state of coronavirus testing in the U.S., which is a crucial metric to track given that the World Health Organization has said that testing is perhaps one of the most important parts of any effective method of combatting the outbreak.

“As we talked about earlier this week, the commercial system is rapidly advancing in the testing capabilities,” explained task force member Admiral Brett Giroir. “As of today our public health laboratories, meaning the CDC and the public health labs, have reported out 31,878 tests so almost 32,000 tests. The clinical laboratories, the Association of Clinical Laboratories, have reported out about 27,000 tests, and most importantly of those 27,000 during the cumulative period of time 8,200 of them were yesterday.”

That brings the total number of tests conducted between these sources to just under 60,000 tests, which Giroir said represents a “dramatic ramp as the high-throughput [testing] comes in.” He also noted that we don’t yet have numbers reported from individual hospital labs that are also conducting testing, and that an fellow task force member Ambassador Deborah Birx’s forthcoming legislation will provide more clarity on the actual number as it rolls all testing sources into a common reporting structure. This reporting arrangement should be in place by early next week, he said.

“In terms of our drive to laboratories, again, these are blossoming all over the country,” Giroir said. “By individual states, the ones that we are heavily involved in, in really pushing equipment to, we expect over the next few days to be again setting up 47 of these in approximately 12 states. The material is already palletized and being shipped to the locations, most cities have the specific locations, some do not but it’s still gone to a central receiving, and we know that we’ll be deploying at least 140 Commissioned Corps officers, and about half of the sites have reported their requirements, but 140 officers will be going and we expect that to go up.”

Giroir added that they set up and ran a trial site of these mobile testing locations on Monday, with a full staff complement, and noted that while they “had a lot of kinds in the system as you can expect,” he added that this is the reason they do testing and people shouldn’t expect them to be perfect when they first come online.

Ambassador Brix also said regarding testing that she believed we would see in the next few weeks that “other tests that were used around the world were not of the same quality” as the ones that are being deployed in the U.S., and that have been approved by the FDA for use by private labs. These provided more false positives and false results than the tests that will be in use in the U.S., she said, leading to potentially inaccurate data. The U.S. reportedly refused use of WHO-prepared coronavirus testing kits early on in the COVID-19 outbreak, opting instead to develop its own via the CDC, though Admiral Giroir said that as far as he could discern, no one made an offer that the U.S could refuse.

“Testing should not be used as an assessment of your risk,” Brix also added, noting that everyone should still follow the recommendations issued by the White House to maintain social distance and avoid groups of 10 or more individuals. She urged everyone, and young people especially who might think that because they don’t feel sick or aren’t in as serous risk, to follow the guidance and stay home if possible.

Task force member Dr. Anthony Fauci addressed the interrelationship between testing and the social distancing and isolation guidelines. He clarified that “even if we had no testing, we should be doing what we’re doing now,” but stressed that testing was indeed important for providing healthcare workers and those working on strategy with an idea of what they’re dealing with, and the effect its having. He also noted that we shouldn’t be looking at daily figures regarding confirmed cases as a good indicator of what impact distancing and other strategies are happening, since we’ll only see how these efforts are playing out over a longer period of time.