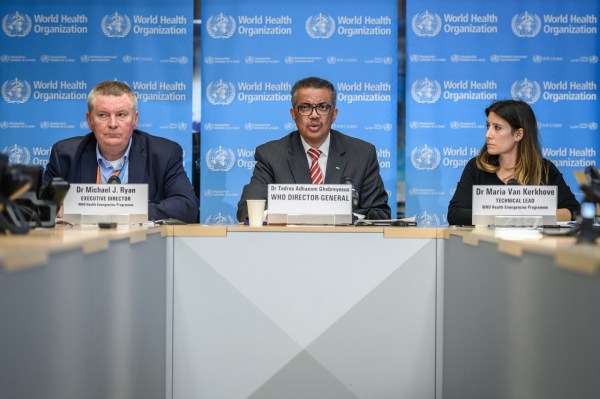 The World Health Organization (WHO) held a briefing today for media to update them on the current status of the global pandemic of the COVID-19 coronavirus, and called out worldwide efforts on what the agency’s Director-General Tedros Adhanom described as not an “urgent enough”  response in terms of fielding a truly comprehensive approach.

In prepared remarks to kick-off the media Q&A, Adhanom said that while to date we have “seen a rapid escalation in social distancing measures, like closing schools and cancelling spring events,” there still hasn’t been enough done on a global level in terms of “testing, isolation and contact tracing,” which he said formed the “backbone of the response.”

“You cannot fight a fire blindfolded,” Adhnom said. “And we cannot stop this pandemic if we don’t know who is infected. We have a simple message for all countries: test, test, test. Test every suspected case. If they test positive, isolate them and find out who they have been in close contact with up to 2 days before they developed symptoms, and test those people too.”

The agency noted that it has shipped a total of 1.5 million tests to 120 countries thus far. The U.S. in particular has lagged behind its global peers when it comes to testing, with the country refusing the WHO tests offered and opting instead to develop its own CDC-developed tests, whose initial rollout met with mirrors. Based on data from last week, the U.S., even now that private lab tests are coming online to attempt to supplement the CDC-issued ones, the country is still far behind Japan, the UK, Italy, China, South Korea and many others when it comes to testing on a per capita basis compared to its population.

Adhanom went on to advise that all confirmed cases be isolated once identified, in health facilities if possible, but in either makeshift facilities set up for the purpose if that’s not an option, or for those with very mild symptoms, at home. He clarified this meant that care-givers treating people at home should wear a medical mask when they occupy shared space, and that the patient should both sleep separately and use a different bathroom.

“Once again, our key message is: test, test, test,” Adhanom said. “This is a serious disease. Although the evidence we have suggests that those over 60 are at highest risk, young people, including children, have died.”

He also pointed out that while we’re now seeing epidemics even in developed countries with advanced health care systems and institutions in place, facing significant challenges, there’s an even greater pending global threat as the pandemic spreads to low-income nations. Adhanom said that limiting impact among those vulnerable populations requires “every country and every individual to do everything they can to stop transmission.”

During the Q&A, Adhanom went further, noting that while the immediate threat still needs to be addressed, and addressed promptly, the COVID-19 pandemic has also revealed fundamental issues with our global approach to pandemic preparedness that we’ll need to address longer-term.

“Globally we have a very, very serious weakness in terms of preparedness,” he said. “While doing our best to suppress this pandemic, at the same time we have to think about planning for the future, for the long-term. Improving our preparedness, making sure that the world is better prepared.”

“It’s time to commit to invest in our weaknesses, and minimize our risk as a global community,” Adhanom continued. “No country can develop or strengthen its system and protect itself from outbreaks, epidemics or pandemics. The world is more intertwined than ever before – globalization cannot be reversed […] we need to make sure that we act in unison to build the global preparedness and the global resistance.”

WHO also reiterated and clarified the best actions that individuals can take to help contribute to the global effort to combat the spread of the virus. The organization’s COVID-19 Technical Lead Dr. Maria Van Kerkhove, an infection disease epidemiologist, acknowledged that people are feeling afraid, and stressed the importance of hand-washing as one action that everyone can take to make a difference.

“Being scared is normal, what we need to do is channel that energy into something positive, and making sure that you know what you can do to protect yourself,” she said. What we do know that works in terms of your hands, and in terms of what you need to do, is washing your hands. We say this all the time. And it may not be the most exciting thing, but it’s the most important thing that you can do to protect yourselves.”

“Every single person who is washing their hands is helping themselves and others,” she continued, noting that everyone should “wash [their] hands as much as they possibly can.”